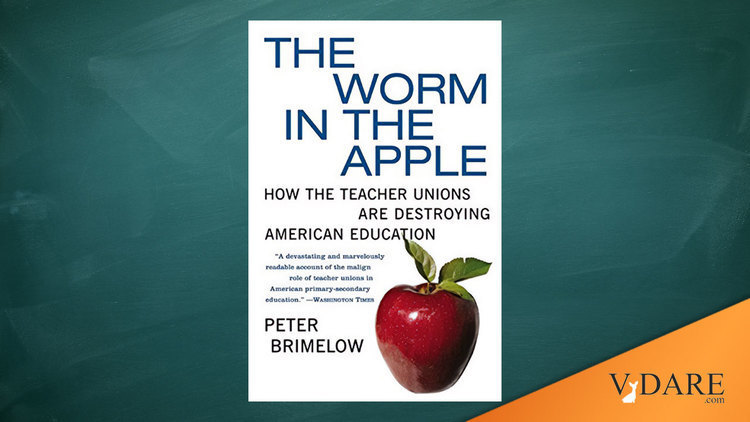 An Educational Call to Arms

Peter Brimelow's The Worm in the Apple: How the Teachers Unions are Destroying American Education is available for purchase from the FrontPage Magazine Bookstore.

To the dismay of some on the radical Left, the post-Vietnam U.S. has bolstered its position as the world's political, cultural, and economic leader and served as a fulcrum for the dreams and aspirations of freedom seekers worldwide.  Remarkably, America has thrived despite a decline in public school quality that largely coincided with the advent of widespread teacher unionization, which commenced in the 1960s.

In The Worm in the Apple: How the Teachers Unions are Destroying American Education, veteran education writer Peter Brimelow presents a devastating indictment of the teachers' unions and their deleterious effect on students nationwide.  Having entered the education policy fray without a preconceived agenda, Brimelow "approached education as if it were any other industry.  The important issues were input and output," i.e., resources consumed relative to the quality of the education furnished.  Sadly but characteristically, the teachers' unions excoriate anyone who notes that the government school system provides mediocre service at meteoric prices.

Writing in a style that is accessible and sophisticated (although at times overly informal) Brimelow adds a smattering of economics and common sense to a wide variety of documented source material, producing a detailed portrait of the teachers' unions and government school systems.  For readers interested in pursuing this issue beyond the confines of Worm, the author provides helpful references to resources such as www.eiaonline.com, the website of Mike Antonucci's Education Intelligence Agency.

After providing the requisite examples of student and teacher ignorance, Brimelow observes that SAT scores, a popular and objective achievement barometer, "deteriorated dramatically" in the 1960s and 1970s.  America's largest teachers' union, the National Education Association, "responded by calling for the abolition of standardized testing," perhaps because "it is a very awkward fact for the NEA that the 'Great Decline' occurred at exactly the time when teachers were becoming unionized."

Despite their chronic inability to sow academic excellence, the government school system and the teachers' unions continue to reap handsome rewards—per pupil spending has climbed above $7,000 per year and has outpaced overall economic growth by more than 50 percent over the past century.  Disturbing amounts of the largesse find their way to non-teaching staff, administrators, etc.—in some districts, teachers comprise less than half of the educational workforce.

Teachers' unions continue to receive more of society's resources than they merit because they are economic "rent seekers" who exploit their trusted position to extort economic concessions from parents and politicians.  Contrary to popular belief, many teachers and union functionaries take home more than they would working elsewhere, and scores of union operatives receive six-figure salaries and myriad perks.

Because the educational establishment has so much to gain from the status quo and continuing its reign over the nation's pupils, it seeks to pulverize any foe with scare tactics, blanket demonization of opponents as maniacal right-wing extremists, insincere rhetoric to unionize "for the children," and reliance on their dominant role in the Democratic party (whose leaders depend on union backing but always seem to send their own children to private schools).  Thus, few tasks could be as daunting as dislodging the entrenched educational establishment.

America's students and its better teachers are the primary victims of the teachers' unions.  Millions of children continue to receive a substandard education, and disproportionately large numbers of minority and disadvantaged students continue to languish in government schools that excel at nothing more than consuming resources—as they have throughout 50+ years of Democrat dominance of virtually all of our urban school districts.  Enforced egalitarianism encourages mediocrities to become teachers while restricting the economic and academic freedom of stellar educators.  Furthermore, Worm offers examples of the uncompromising union procedures that ensure that incompetent, dishonest, and in some cases criminal teachers can ply their trade with impunity for years.

Brimelow advocates the introduction of marketplace principles into the heretofore closed educational market.  Predictably, the teachers' unions maliciously oppose any initiative that might require educators to compete or to demonstrate that they confer value to students.  School vouchers, the best and best-known example, would afford students and parents the golden opportunity to escape moribund government schools by covering a substantial portion of private school costs.

Disregarding the immeasurable to benefit to disadvantaged children, the teachers' unions have resorted to "moral blackmail" to shame parents into keeping their kids in academic chains.  Educational establishmentarians have regularly impugned voucher advocates and falsely claimed that vouchers will destroy American education and are also insufficient to pay for non-government schooling.

As Brimelow notes, the unionists appear ignorant of the "Model-T Effect," whereby the marketplace will respond to increased demand with increased supply and lower prices. If parents initially pay to bridge the gap between government and market educations, the teachers' unions should respect the parents' choice and perhaps ponder why low-to-moderate income people welcome added financial burdens to liberate their children from government schools.  Summing up the unionist position on vouchers and children, former NEA President Keith Geiger once bellowed, "Quit talking about letting kids escape."

Cognizant of the nascent market and choice movements and perhaps taking a page from Bill Clinton's playbook, the teachers' unions have devised plans to co-opt market rhetoric to block meaningful reform and stymie their opponents.  Hence, as Brimelow recounts, government school guardians have introduced bogus versions of "merit pay" and "peer review" that might boost the image of teachers' unions but would accomplish little else.

While instructive and compelling, Brimelow's book is not immune to miscues.  Worm's first three words, "They're extraordinarily fat," and the ensuing graphic descriptions of a few obese educators, are a nasty swipe at the teacher body and arguably inappropriate in a serious treatise.  Other potshots pockmark the book.  Additionally, Brimelow constantly likens the teacher trust and government school system to instruments of Soviet Communism; while decrying the socialist aspects of the school system may be apt, excessive Soviet references could overstate the case.  In this context, naming the final chapter "What is to Be Done?"—which is also the title of a famous work of Lenin—is peculiar.  Finally, Worm has a mildly repetitive feel.

Summarizing his theses in the final chapter, Brimelow presents a twenty-four point "wish list" for government school reform.  He emphasizes the following general ideas: 1) the need for free market mechanisms to allocate educational resources; 2) the importance of eliminating the legal monopoly privileges that empower government schools and the teachers' unions; 3) the difficulty of reforming government schools in the face of the unions' influence on the Democrat party.

In conclusion, Brimelow voices his concern that the teachers' unions might pack the political clout to frustrate permanently the necessary reforms.  He also poses interesting but unresolved questions about the future of unions in general and the teachers' unions in particular.  Regardless, Worm is a valuable resource for Americans who sincerely believe in meaningful educational opportunity for all children.