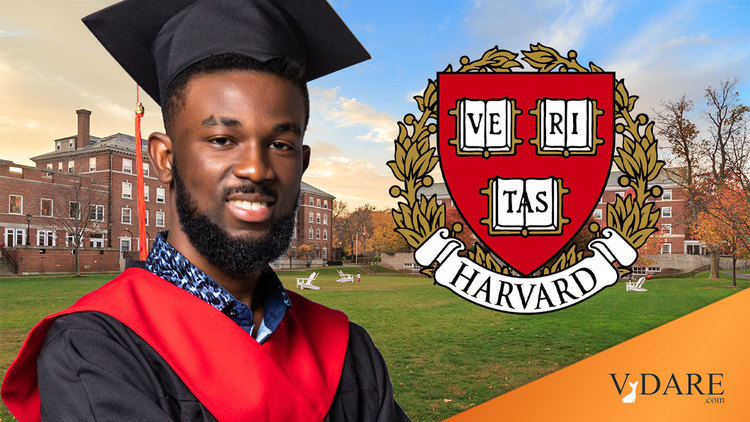 At Harvard University, the New Year blasted off with a little lesson in the Afro-racist version of what the Nazis used to call Gleichschaltung—literally, disciplining of the opposition, but more accurately translated as kicking in the teeth of anyone who doesn't do and say what you tell him to do and say. Indeed, the year not only started with the lesson but promises to continue with it well into the future.

Last October, Harvard's new president, Larry Summers (send him mail), formerly President Clinton's Secretary of the Treasury, had a little chat with black Harvard professor Cornel West. Professor West, you must understand, is a Big Name, a "University Professor" who has published lots of books and is well known outside his academic field, which in his case is what these days is called "Afro-American Studies."

The chat apparently was not friendly. Mr. Summers criticized Mr. West for spending too much time away from his teaching duties—serving as a political adviser to the presidential campaigns of Sen. Bill Bradley and more recently of the Rev. Al Sharpton—and for cutting his own record of rap music.  (Listen to samples here.) He also pointed out that Mr. West's courses display what is politely called "grade inflation"—that is, the prof hands out A's like penny candy, rendering his courses popular with lazy undergraduates but not very demanding intellectually.

Any other professor would have taken a talk like this from the president of his university as a warning to straighten up or ship out, and most academics would have straightened.

But Mr. West is black and Mr. Summers is white, and this is Harvard, so that's not what happened. Instead, Mr. West promptly alerted the Afro-bigot squad that racism was being committed. Soon the Rev. Jesse Jackson was preaching that he was "disturbed" at President Summers' apparent lack of enthusiasm for affirmative action, the Rev. Sharpton himself rumbled that he just might sue Harvard for interfering with his plans to become president, and before you could spell Kwanzaa, an entire platoon of Afro-racists was ranting and raving about President Summers, Harvard itself, white society, America and all the rest of the blather.

Buttressed by support from the Afro-American Studies Department's chairman, Henry Louis Gates, who is more or less a real scholar, and someone who calls himself Kwame Appiah, a philosophy professor, Mr. West was soon gasping that he just might leave Harvard and go to a real racial utopia like Princeton. "When you're disrespected like that," Mr. West fumed about his talk with Mr. Summers, "you don't stay at a place."

Well, maybe he was beginning to catch the drift of what Mr. Summers had been hinting at all along, but this—again—is Harvard, and that's not how things work.

By the beginning of the new year, Mr. Summers had confessed his sins in a note to the Harvard Crimson, affirmed his pride in Harvard's "diversity," his commitment to affirmative action, his ambition to make Harvard even more "diverse" and his deep regrets over any misunderstanding Mr. West might have had. "Diversity contributes to educational excellence," Mr. Summers recited. And of course, he vowed he wants to keep the famous Afro-American Studies Department and everybody in it at Harvard.

But that wasn't enough for the persecuted Mr. West, who promptly responded that he had been "attacked and insulted" by Mr. Summers and might just leave Harvard anyway. "The one thing I do not tolerate is disrespect, being dishonored and being devalued," the black windbag blustered. "As much as I forgive, I will not forget."  [Click here if you want to listen to West on the Tavis Smiley Show. You must have RealAudio, low blood pressure, and a lot of free time.]

Mr. West denies that Mr. Summers' original criticisms of his academic performance were true, but whether they were or not, at this point Mr. Summers would be perfectly justified in firing Mr. West and closing down the whole department. Scholarship, the real kind rather than the fake version to which "diversity" contributes so much, would improve dramatically, as would the public understanding of who—the duly appointed president or a gaggle of academic frauds who got their jobs through affirmative action—really runs the university and who determines the standards of the education it offers.

But, yet once more, this is Harvard, and that's not the way it works. The way it works at Harvard is what happened soon after Mr. Summers published his cowardly letter and Mr. West brayed forth his crudities. Harvard's provost told a group of professors the university was placing their proposal for a Latino Studies Department "on the front burner," after Mr. Summers had rejected the idea twice. "Several of the Latino professors last week said they were thinking about leaving Harvard because of the president's lack of support."

If Mr. Summers and other whites don't understand the way it works at Harvard, you can bet the non-whites do.