The Main Stream Media is attempting to regain control of the Narrative by pushing back against what they call Fake News. Many on the right have already co-opted this term, but there is a real meaning to it. There was some fake news during the presidential campaign—I remember reading about the likes of Harrison Ford or the Pope endorsing Donald Trump. Whether it actually made a difference in the end is unlikely.

Either way, the mainstream media is attempting to restore its credibility by portraying themselves as hard-hitting truth tellers in contrast, I suppose, to President Donald Trump. The problem is they simply can’t get out of their own way.

One of the best examples was just in the past few days, when the media gleefully reported anti-Trump news, only for it to be rebutted within hours. ABC reported General Michael Flynn was prepared to testify candidate Donald Trump had instructed him to reach out to the Russians, which would support the narrative of collusion. What had actually happened was Trump made the request after he was elected president, which would make this command his literal job. [ABC News president excoriates staff over Brian Ross’ Michael Flynn error, by Oliver Darcy and Brian Stelter, CNN, December 4, 2017]

As a furious ABC executive noted, all they had to do to get the story right was simply wait a couple hours. But they were so eager to get a story out there that would make Trump look bad.

Sometimes, they just make things up, as they did when President Trump recently visited Japan.

As Fox News pointed out:

A number of liberal commentators printed the story, getting thousands of likes and retweets on Twitter. The retractions and clarifications, to the extent they happened at all, garnered far fewer.

This is a small example, but this kind of thing seems to happen all the time. The media occasionally just makes things up. But far more often, the lying press simply misleads when it comes to providing context.

Consider for example the great wave of hysteria about all the bomb threats being made against Jewish community centers or the desecration of Jewish cemeteries. Or, for that matter, the black church burnings which turn out to have been committed by blacks themselves. Or the innumerable hate hoaxes which seem to be happening on every college campus in the nation.

President Trump, we remember, was shamed for apparently not doing enough to speak out against the anti-Semitic violence which had supposedly been unleashed by his election. Even speaking about it during his address to a Joint Session of Congress was deemed insufficient.

But it turned out some of the calls had been made by a black journalist. Most of the rest were made by… a Jewish man from Israel. 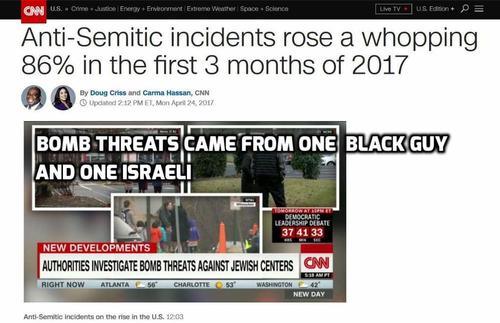 The story quickly went down the memory hole. Yet now we are seeing more stories saying that the real problem this country faces is a wave of anti-Semitic violence. And these bomb threats are being used as much of the evidence for this claim.

For example, the ADL claims, in remarks widely circulated by the mainstream media:

Anti-Semitism is skyrocketing in the United States, according to the latest report by the New York-based Anti-Defamation League (ADL).

However, as the Jewish Telegraphic Agency admitted, these figures “factored in a string of bomb threats largely attributed to a Jewish man in Israel” [Anti-Semitic incidents surge in United States, ADL says, November 2, 2017]. Anti-Semitic “assaults” are also on the decline.

Nonetheless, it’s the ADL, which makes these sensational claims and has an incredible double-standard when it comes to ethnonationalism, which is working with Google, Facebook, Twitter and other online giants to regulate speech online [Google, Facebook, Twitter, Microsoft Join Forces With ADL To Create ‘Cyberhate Problem-Solving Lab,’ by Allum Bokhari, Breitbart, October 10, 2017]. Even as the reasons for these moral panics are exposed as a hoaxes, no one in the media learns any lessons or has second thoughts. They simply keep pushing the narrative.

To use another example, look what just happened at the Air Force Academy. The head of the Academy gave a passionate speech about “dignity” and “respect” because someone had scrawled crude graffiti outside the dorm room of black cadets. As you’ve probably already guessed, it was put there by an African-American himself. 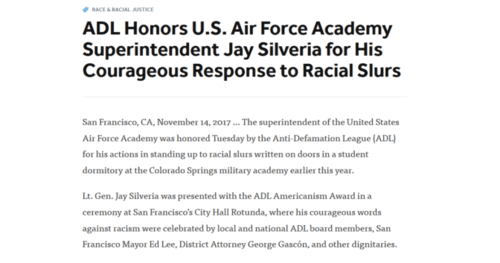 Nonetheless, the incident is still being used to shame white people. And the head of the academy who gave a speech denouncing “racism” is being praised for his supposed “courage.”

Some say politics is downstream from culture. But what passes for culture today is simply a set of extremely simplistic narratives which is pushed by the media regardless of what is actually happening in the world. And the way the media gets away with it is by constantly pushing stories they want to be true—from the UVA rape hoax to the supposed wave of bomb threats against Jewish community centers—and then quietly whispering the retractions. It’s made even worse because of how leftists on social networking gleefully retweet stories that aren’t even true.

Thus, the mainstream media, quite knowingly, deliberately invented President Trump making a diplomatic faux pas, even though it never happened. This was then circulated throughout the Internet because people wanted it to be true, the same way people want certain “hate crimes” to be true because it supports their narrative.

But even with something so simple as feeding fish, the media had completely made it up. They were knowingly lying. And if they are lying about something this small, what else are they lying about?