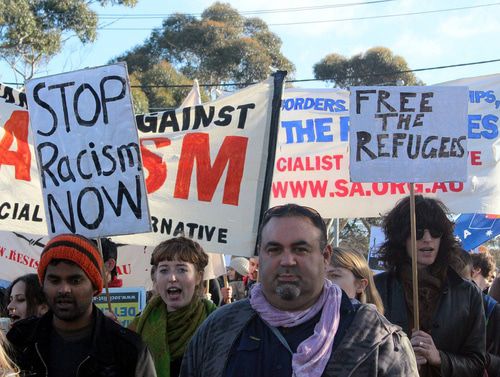 Jay Nordlinger of National Review is one of those people who believes in the former idea. As far as I can tell, in his conception, America is simply a landmass and a set of institutions that can assimilate any number of people from anywhere. No matter who we admit, we’ll churn out Americans the Founding Fathers would have recognized. Thus, we get his latest piece of pro-refugee propaganda.

The world is now facing the worst refugee crisis since the end of World War II. And the United States is admitting the fewest refugees in 40 years. I have a great deal to say about this. This question goes to what we think of America: its purposes, its nature, its reason for being. But I will confine myself to a few thoughts, and a few links.

A concern for refugees used to be part of the conservative makeup. It was certainly that way when I joined up with conservatism, long ago.

Of course, why is the world facing this “refugee crisis?” What ostensibly sparked it was the overthrow of the Gaddafi regime in Libya, a regime change supported by, you guessed it, National Review. From an article by The Editors in 2011—“Our first interest in Libya is seeing Qaddafi gone”. [What We Can Do In Libya , February 28, 2011] It was the Qaddafi regime that was preventing a huge migration from Africa over the Mediterranean, but Conservatism Inc. decided he needed to go.

The other thing that created the refugee crisis was the Syrian Civil War. And aid to the opponents of Bashar al-Assad’s regime was supported by, you guessed it, National Review. “We have long advocated aiding the relatively moderate Syrian opposition and thought it was a mistake to abandon Syria to the Sunni extremists on the one hand and the Iranian-backed killers around Assad on the other without attempting to create a cohesive fighting force more favorable to our interests,” wrote The Editors on October 6, 2014. [A Half-Hearted Fight] I can’t think of anything more favorable to our interests than avoiding a wave of mass immigration.

Yet leave that aside for the moment. Is America supposed to be a home for our people, or simply a boarding house for unlimited refugees? What about Americans? You know, the people who were born here and really don’t have anywhere else to go? Sometimes, you hear the illegal immigrant lobby telling us to “go back to Europe,” but even that won’t be an option much longer unless you want to convert to Islam.

After all, as Steve Sailer has pointed out, tens of millions of Americans are already de facto internal refugees after major cities became dangerous in the late 1960’s and 1970’s. And there are fewer and fewer places to go.

Mr. Nordlinger is also deeply dishonest, mocking the idea that Europeans have legitimate concerns about being overwhelmed by migrants. He specifically targets Viktor Orban, the leading patriotic European head of state, for not participating in a George Soros program for transporting refugees into Hungary.

“Fifty-five,” sneers Nordlinger. “Just 55 people, who need a chance at a new life. Can’t have that, not in a Christian Nation like Orbánland.”

No, we can’t. After all, it won’t stop at 55. And we all know Europe isn’t facing a few photogenic refugees, but a nation-crushing, civilization destroying wave of mass immigration.

As Andrew McCarthy wrote in National Review itself last year:

It was a careful choice of words, Bernard Lewis being nothing if not careful. In 2004, the West audibly gasped when its preeminent scholar of Islam famously told the German newspaper Die Welt,“Europe will be Islamic by the end of the century,” if not sooner.

Listen carefully. He did not say that Muslims will be the majority population in what is still recognizably Europe. No, Professor Lewis said “Europe will be Islamic.”

Does Nordlinger care? Does he notice? Or is it “true conservatism” to cheer on the eradication of Western Civilization because you want to indulge in schmaltz?

We simply don’t have the time to indulge this refusal to think anymore and we don’t have the luxury of tolerating cowardice. Our country should not be sacrificed so people like Mr. Nordlinger can engage in the kind of mushy-headed fantasizing that conservatives used to associate with the worst kind of champagne socialism. This is a time for action. And it is a time to fight.

Besides, if you absolutely need to let in some refugees who are facing government oppression and want a chance at a new life, what about the Afrikaners?