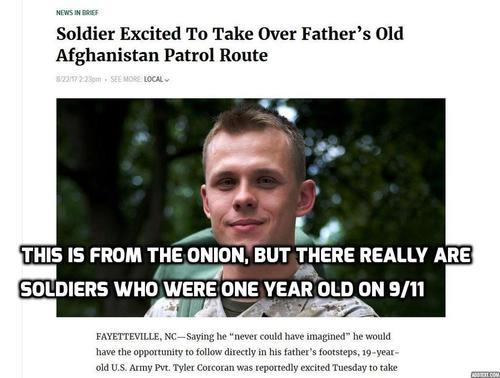 Two stories today in quick succession. The top police officer in Afghanistan was killed, two Americans were wounded, and a top U.S. commander barely escaped in a terrorist attack earlier this week. [Top Afghan police chief killed, 2 Americans wounded in Kandahar attack, by Nick Paton Walsh, Barbara Starr and Ryan Browne, CNN, October 18, 2018] Some reports indicate that the killer was an Afghan bodyguard, meaning exactly the type of person whose job it is to prevent these kinds of attacks. Seventeen years after intervening in Afghanistan, we can’t even assume a bodyguard’s loyalty to the country’s top officials.

Meanwhile, a column of at least 7,000 migrants is heading towards our southern border. President Donald Trump is threatening to withhold aid to Latin American nations unless they do more to stop the migration. However, this presupposes that there is nothing we can do to stop them ourselves. [Trump threatens to cut aid to Honduras over migrants, BBC, October 17, 2018] Is this the behavior of a superpower, begging other nations to fulfill our basic responsibilities?

After all, President Donald Trump’s most iconic campaign promise was to build a wall on our southern border—a wall that we were told was going to be built “quickly.” Now nearing some tough midterm elections, no wall has been built. We were also told Mexico would pay for the wall. Even if Mexico does not give us wall money directly, we could still make the nations exporting their people to our country pay by slapping on a remittance tax. Yet for some reason, that idea has gone away. Why?

There’s a fundamental premise underlying both of these stories. It’s that the United States of America exists for the benefit of foreigners, not for American citizens themselves. We are supposedly fighting if Afghanistan to bring the Afghan people democracy and freedom. These may be worthy goals, but if we haven’t made any meaningful progress in close to two decades, it’s unclear how sticking around longer is going to make a difference. More importantly, isn’t the purpose of the American military to defend our own country?

As Army Colonel Larry Wilkerson recently opined, America’s involvement in quote, “less than existential” unquote wars is endangering our ability to win a really serious war if such a need arises. [Col. Larry Wilkerson: Unnecessary Wars Hurting Readiness To Fight Existential Wars, Breitbart, October 16, 2018] A large number of voters, including enlisted voters, are also opposed to these wars. And according to Colonel Wilkerson, most of those people voted for Donald Trump in 2016.

America needs to redetermine its priorities. We don’t have unlimited resources to remake the world in our image. More importantly, if mass immigration continues, America is going to be remade in the Third World’s image. Already, entire neighborhoods and cities are more like foreign countries than anything Americans of even a generation ago would have recognized. If Americans are going to be asked to sacrifice their lives, it should at least be for our own country and for our people to have a chance at a future. It shouldn’t be for people who hate us and don’t want us in their country. And it certainly shouldn’t be to import those people into our country when we already have enough problems.

As Ann Coulter noted, “The American people made Donald Trump president. What else can we possibly do?” Now two years into the Trump Administration, why can’t we have America First? Because from where I sit right now, it doesn’t look like America is a superpower, or even a sovereign nation. Instead, we’re being kicked around by the rest of the world, even countries like Honduras. President Trump had better wake up, because his time is running out. And by his time, I mean, of course, America’s.