VDARE Radio: On Laci Green And Taking The Redpill—SJWs Are Beginning To Defect

Laci Green is a self-described “sex educator” and a YouTube personality who has a large and devoted online following. For those of you who don’t follow such things, you may have heard of her after the election, when she had one of the most spectacular meltdowns following Trump’s victory. Before the election, she bemoaned the divided state of the Union and said there was “so much work ahead to mend, heal, and restore the U in USA.” After Trump’s victory and “total Republican rule,” in her words, she cursed out Republicans and called them “racist, misogynist pieces of [expletive deleted]" [Two Tweets That Perfectly Sum Up Liberals Before And After Trump Became President, by Benny Johnson, IJR, November 8, 2016]. Green is, in short, something close to a perfect exemplar of the online Social Justice Warrior.

So this is not someone who comes from the Right by any stretch. However, not long ago, a couple of things happened to Ms. Green. In May, Laci Green posted a video entitled “Taking The Red Pill” which attempted to explain some pro-masculine, anti-SJW perspectives and held out the prospect of debates between the two sides. Needless to say, many of Green’s 1.5 million fans were not happy.

Second, Green recently began dating Chris Ray Gun, a YouTuber who occasionally pokes fun at Political Correctness. This, by itself, led to accusations she was a traitor to feminism, as well as an indication no white people can ever be trusted by feminists. We can’t link to many of the “critiques” leftists have made of her, mostly because they consist of obscenities in all capital letters. 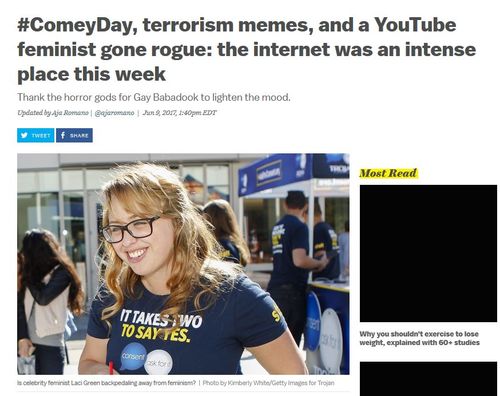 But this excerpt from the ostensibly mainstream website Vox is probably the most moderate, believe it or not.

All in all, Green is probably the classic example of a feminist whose feminism was never grounded in a deep commitment to the principles behind social justice. Because her articulation of the basics of feminism was simple and neat, her platform was more palatable to mainstream liberals and casual progressives than, say, someone like Roxane Gay. But that ultimately seems to have made Green more susceptible to having her worldview dismantled through engaging with right-wing YouTubers.

[#ComeyDay, terrorism memes, and a YouTube feminist gone rogue: the internet was an intense place this week, by Aja Romano, June 9, 2017]

One of the defining characteristics of the Left is how it politicizes all existence. Green essentially became a traitor to her sex simply by dating someone professional feminists don’t approve of. Thus, feminism, a movement ostensibly dedicated to individual autonomy and liberation from the government policing your bedroom, ends by policing your bedroom.

Still, this doesn’t necessary mean the Left is weak. They may be crazy, they may be unhinged, they may be deeply unstable on a personal level. But the social pressure they are able to put on people constitutes a huge advantage for them. People feel afraid to disagree with the radical Left, even slightly, because it can mean losing their entire social circle. Even friends will turn on you with utter savagery.

One thing Green said in her Redpill video was, ““This is a pretty big concern of mine, I’ve felt this way for a long time, it affects my work, it affects the way I can interact with people, the things I can talk about, the people I can talk to.”

I think a lot of us can relate to that. Even after the last election showed we are not alone, we often feel the need to censor ourselves, even around our friends, simply because the intolerance of the Left gives it a strange power. While it wouldn’t occur to us to fire, punish or physically attack those we disagree with, the Left has no problem doing these things to us.

Ultimately, the only way this power is broken is if more and more people step forward until there is a critical mass. The fact SJWs are now beginning to “defect,” as it were, is an encouraging sign. Because our side has nothing to fear from free speech and open debate. Only the side that constantly brags about its “tolerance” does.