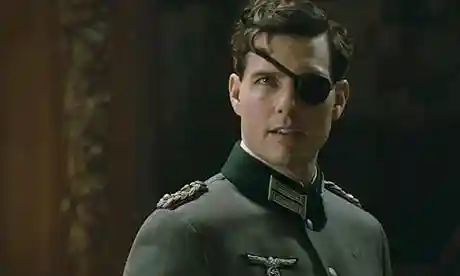 "Valkyrie," with Tom Cruise as Col. Stauffenberg, who led the July 20, 1944 assassination and coup plot against Hitler, is a fairly decent movie that never quite overcomes the obvious problems with making a thriller where you know ahead of time that the hero fails, and there's only one explosion and a brief shootout. Still, it's a respectable, grown-up film.

And that leads to the question of whether Cruise should have played Count Claus Philipp Maria Schenk Graf von Stauffenberg. Ever since Cruise replaced his publicist with his sister, his public image has been in ruins, but I've never gotten too worked up over that. I've never much liked Cruise as an actor, because he doesn't seem to have much going for him except energy, but he has a track record with remarkably few outright failures on it ("Lions for Lambs" being the only one in this decade). Tom Cruise's name on a film suggests that it's not going to be totally bad. Strange as it may seem, the Cruise brand name implies that the film will be a quality product.

Facially, Cruise is quite plausible as the handsome 37-year-old colonel. Still, much of Stauffenberg's charisma, which was essential in his driving a military plot large enough to have a chance at not just killing Hitler but overthrowing the Nazi Party, stemmed from his epitomizing the best traits of the old German aristocracy. Cruise doesn't do upper class grace. Mostly, Cruise just does intensity. The film would have worked better with a Shakespearean-trained English actor as the Count. Or, if Cruise was essential to the financing, then lose the stage-trained Englishmen in the supporting roles and replace them with Americans.

Director Bryan Singer adds to the style of the film, especially its art direction, a note of gay hysteria that is not all that historically inaccurate in depicting Nazi Germany.