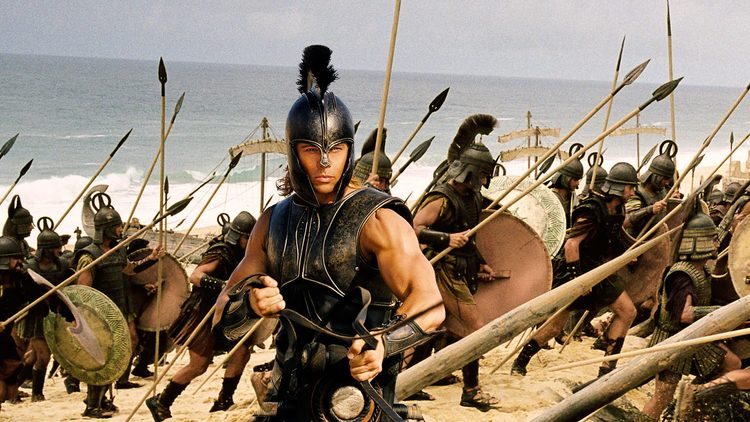 The Movie I Talk About The Most

I was looking at a list of some of the ridiculous number of movies I've reviewed over the last decade, and it occurred to me that the movie from the last ten years I wind up mentioning the most in non-movie-related conversations is ... Troy, the middlebrow big budget version of the Trojan Wars with Brad Pitt as Achilles, Sean Bean as Odysseus, and written by David Benioff. (Bean and Benioff reunited for 2011's Game of Thrones on HBO.)

The movie made $364 million outside North America, but only $133 million here, perhaps because American audiences found it too high-brow and alienating: Achilles is a jerk concerned only with achieving everlasting glory who doesn't pretend to be a regular guy the audience can relate to. (That we're sitting here 3200 years later watching Brad Pitt play Achilles would seem to suggest Achilles was on to something that we might not care to admit.) American critics on the other hand found it too lowbrow, because it didn't stick solely to the Iliad (more critics were English majors in college than anything else), but brought in crowdpleasers from non-Homeric sources, such as the Trojan Horse. (My view: of course you have to have the Trojan Horse in Troy.)

Why do I wind up bringing up this pretty good but not great movie all the time? Because the Trojan War is so central to Western literature, philosophy, and even math. For example, the joke in the opening scene where Brad Pitt faces off against a giant in single combat, then suddenly sprints toward his enemy like Usain Bolt and strikes him down, is an ironic  reference to Zeno's paradox of Achilles v. the Tortoise that asserts that Achilles could never overtake a Tortoise (or, in another version, than an edged weapon could never strike home).

Zeno assumed you've heard of Achilles' legendary footspeed. The Classical Greeks used examples like this from the Trojan War constantly, so they come up throughout highbrow Western Civilization.

But Achilles's 40-yard-dash time doesn't come up much these days ... except in this movie that, while it wasn't a giant hit, a huge number of people have, over the years, gotten around to seeing. And thus this middlebrow movie is a useful source for examples for explaining to people all sorts of different things.

In general, a well-made middlebrow movie can be an excellent resource for maintaining a certain amount of highbrow cultural continuity. Middlebrowness tends to be greatly underrated.