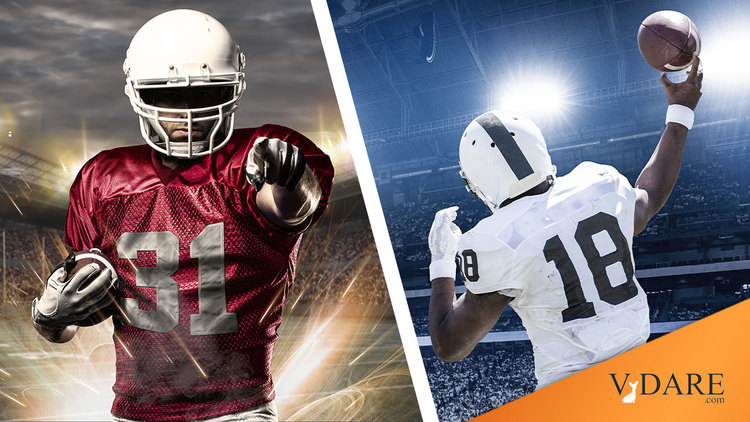 The Big Game—Race In The NFL

This Sunday's NFL game between the 7-0 Super Bowl champion Indianapolis Colts and the awesome 8-0 New England Patriots is the first November battle of undefeateds in the NFL in many years, with temporary possession of the title of the top American athlete up for grabs between quarterbacks Peyton Manning and Tom Brady. For years, Manning had the better statistics but Brady had the Super Bowl rings, but now it's reversed, with Brady putting together an unbelievable half season. If he could somehow keep up this pace, Brady would break Manning's record of 49 touchdown passes and finish with 60 touchdown passes versus only 4 interceptions. By way of comparison, Manning is on pace to finish with the second best TD to interception numbers at 28 to 7. A couple of weeks ago, sportswriter Jason Whitlock pointed out:

African-American football players caught up in the rebellion and buffoonery of hip hop culture have given NFL owners and coaches a justifiable reason to whiten their rosters. That will be the legacy left by Chad, Larry and Tank Johnson, Pacman Jones, Terrell Owens, Michael Vick and all the other football bojanglers.

In terms of opportunity for American-born black athletes, they're going to leave the game in far worse shape than they found it.

It's already starting to happen. A little-publicized fact is that the Colts and the Patriots the league's model franchises are two of the whitest teams in the NFL. If you count rookie receiver Anthony Gonzalez, the Colts opened the season with an NFL-high 24 white players on their 53-man roster. Toss in linebacker Naivote Taulawakeiaho "Freddie" Keiaho and 47 percent of Tony Dungy's defending Super Bowl-champion roster is non-African-American. Bill Belichick's Patriots are nearly as white, boasting a 23-man non-African-American roster, counting linebacker Tiaina "Junior" Seau and backup quarterback Matt Gutierrez.

For some reason, these facts are being ignored by the mainstream media. Could you imagine what would be written and discussed by the media if the Yankees and the Red Sox were chasing World Series titles with 11 African-Americans on their 25-man rosters (45 percent)?

We would be inundated with information and analysis on the social significance. Well, trust me, what is happening with the roster of the Patriots and the Colts and with Roger Goodell's disciplinary crackdown are all socially significant.

Hip hop athletes are being rejected because they're not good for business and, most important, because they don't contribute to a consistent winning environment. Herm Edwards said it best: You play to win the game.

I'm sure when we look up 10 years from now and 50 percent rather than 70 percent of NFL rosters are African-American, some Al Sharpton wannabe is going to blame the decline on a white-racist plot.

Back in October 2005, Inductivist did a statistical analysis for my VDARE.com article showing that in the 2.3 seasons he looked at — 2003, 2004, and early 2005 — that NFL teams with more white second stringers won more games. The correlation between the racial makeup of the starters and percentage of games won was close to zero, suggesting that teams rationally evaluated their starting line-ups. But, it appeared that, at least in 2003-early2005, teams with whiter benches did better, suggesting there had been an under-exploited opportunity to win more games:

Why would having more white nonstarters help a team? Caste Footballs J.D. Cash has suggested that perhaps white utility players are more likely to master the playbooks for multiple positions (as suggested by their higher average IQ scores on the Wonderlic test mandated by the NFL).

Or, possibly, the reason that teams with a higher number of white reserves have been winning more games is because whites are better team players about sitting on the bench without complaining about not starting. Perhaps white back-ups are less likely than black back-ups to poison the atmosphere and ruin the team spirit.

After all, our society for the last 40 years has lavishly encouraged blacks to claim to be victims of injustice, so it would hardly be surprising if, among pampered egotistical athletes, whites might tend to be more likely than blacks to keep quiet for the good of the team when they feel they are being treated unfairly.

Whatever the reason for this pattern, this quick study, while not definitive, is important newsboth to team officials in charge of player personnel choices and also to anyone who likes to bet on football games. It would pay to extend the study over more years to see if it represents a long-term pattern, and to go into more depth to find the reasons for this apparent market failure.

Anyway, there's now a couple of years more data, so somebody might want to check and see if this pattern persisted.