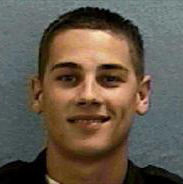 A young Phoenix police officer was killed a few days ago, andÂ  a previously arrested illegal alienÂ  has been charged with his killing. The alien is Salvador Vivas-Diaz, who had been sent home on several occasions under voluntary deportation (under which the illegal accrues no serious penalties if he returns), but had returned every time. Shane Figueroa was only 25 and had a wife and three-month old girl.

A suspected illegal immigrant accused of causing the death of Phoenix Police Officer Shane Figueroa in a traffic crash has been charged with second-degree murder, aggravated assault and forgery.

Vivas-Diaz has had several brushes with the law for DUI and other violations. He was arrested by the Tempe Police Department in May 2004. Since 1998, he has voluntarily returned to Mexico three times. He was deported on June 29, 2004 following an arrest by DPS in Pinal County.

There were warrants for his arrest in both Tempe and Pinal County for previous run-ins with police.[Charges filed in death of police officer, by Sandra Haros/KTAR.com, October 29th, 2008 ]