In Chicago, home to lawbreakers from Al Capone to Elvira Arellano, police recently arrested a major ring of ID forgers.

The production of fake identification is a lucrative associated crime that goes along with illegal immigration. Once Juan breaks in to America, the next item on his list is "Buy forged ID" so he can pose as a legal worker to steal a citizen's job. No believable ID, no employment.

Julio Leija-Sanchez was the CEO of a thriving $3 million-a-year business and, like any businessman, needed to eliminate the competition.

So he picked up the phone and ordered them killed, the feds alleged Wednesday.

Leija-Sanchez, 31, of Oak Lawn, was one of 12 people arrested Tuesday as part of a federal investigation into a highly sophisticated business that provided fake IDs to up to 15,000 people a year in Chicago. Ten others were charged but are fugitives. ['I shot that dude in the liver and lungs', Chicago Sun-Times 4/26/07]

It goes without saying that high-quality forged identification is valuable to mass-murdering Islamist terrorists also.

But the local Mexicans and other open-border enthusiasts were shocked, shocked that guns were used in the arrests. They didn't like the mid-day timing either — too scary for the Children! You can't make this stuff up.

Among the protesters were some witnesses, who said that as many as 16 people were arrested when agents toting rifles and dressed in bulletproof vests stopped about 150 shoppers and workers inside the Little Village Discount Mall. [...]

But the manner in which the action was taken — in daylight as parents walked children home from school — inflamed the community. [ID sweep triggers protests, Chicago Tribune 4/25/07]

Below: Demonstrators in Chicago protest the arrest of violent criminals. 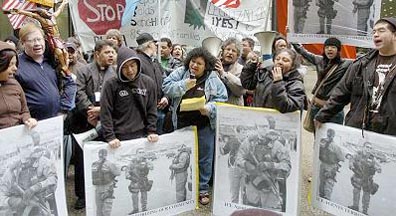