Asian Cruelty to Horses on Display 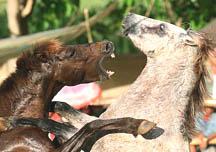 The barbaric bloodsport of horse-fighting is popular on the island of Mindanao in the Philippines and in parts of China. Spectators place bets on the bloody spectacle and eat barbecued horsemeat cut from the unfortunate losers. The activity is officially illegal, but no one pays any attention to the law.

The horrific tournament captured in our photographs happened in the town of Don Carlos and involved 54 horses, many of which had gruesome injuries.

Thousands of people turned out to watch the bloodbath, including hundreds of children. Many of the adults were drunk and spent their time gambling and jeering at the battling animals.

Though horses do not normally fight one another, these stallions had been whipped into a fighting frenzy by the presence of a young mare who was "in season" and had been staked to the ground in the middle of the muddy arena. [...]

Veterinary care is too expensive for most owners to bother with, so wounded horses are often killed for their meat and the choicest cuts barbecued and sold to the crowd. [Tournament of blood: The sheer horror of horse-fighting,By Danny Penman, Daily Mail, February 18, 2008]

As I've written before, aversion to animal cruelty is not a cultural norm in many societies: Diversity Is Strength! It’s Also… Cruelty To Animals.