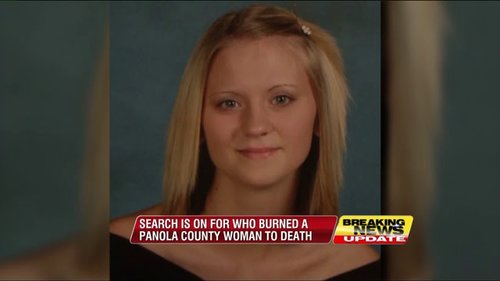 Sometimes the absence of a story is the story—the rat that didn’t squeak.

The atrocious murder of a nineteen-year old white girl, Jessica Chambers, in Panola County, Mississippi is one of those cases that should be a huge story but has largely been ignored by the national Main Stream Media.

Shortly after 8 p.m. on December 6th, Jessica Chambers was splashed with accelerant and burned alive as she sat in her car in Courtland. Still on fire, she made it out of her vehicle and collapsed. 98% of her body was burned—as her father said, everything but the soles of her feet.

When Courtland Fire Chief Cole Haley arrived, she reportedly told him a name—reportedly “Eric” or “Derrick,” before she died a few hours later. [Man questioned in the death Jessica Chambers [sic] says he did not know her, by Janice Broach, WMC 5, December 13, 2014]

Recently, the Bureau of Alcohol, Tobacco, Firearms and Explosives (ATF) announced that it was offering $10,000 for information leading to the arrest and conviction of Chambers’ killer or killers. Between the ATF, FBI, U.S. Marshals Service, the Mississippi Bureau of Investigation and the Panola County Sheriff’s Office, the total reward money being offered is now up to $53,000. [ATF adds $10,000 to reward for information in Jessica Chambers investigation by Ashley Crockett, WREG, January 22, 2015.]

When someone commits a murder, the saying goes that the case will either be solved during the first 48 hours or years down the road, if ever. And though the reward shows the authorities want to solve the case, the trail is cold.

Speculation is especially rife because of the racial undertones in the murder of a young white woman who was romantically involved with black males. The authorities’ December 11 press conference featured some odd comments by Sheriff Dennis Darby said on interracial cooperation (6:35):

“I’d also like to thank the general public in every area, every race that we have here… The black ones and the whites have worked together…

“And I want to say thank you to all of you [blacks] here….

“And if they [blacks] find out, regardless of who they are, they’re going to let us know….”

But it seems there has not been much of an actual response from the black community, except accusations on social networking that Jessica’s father, Ben Chambers Sr., killed her.

It’s fashionable to complain about the attention that victimized white girls receive from the Main Stream Media.

But in my experience, the deciding factor is who the MSM believe is the perpetrator. If the MSM believes it’s a white male, they’re all over the story. If they suspect that the “wrong kind” of perp committed the deed, they’ll observe radio silence.

Based on the MSM’s behavior, I have to conclude that most reporters believe that Jessica Chambers’ killer was black. But that doesn’t guarantee that they’re right.

As there is little information, there is has been a speculation war. The main players have been the bloggers Sundance at The Last Refuge/Conservative Treehouse; Charles Johnson and Chris Cardillo at Got News; local blacks on social media, and the “hacktivist” group, “Anonymous.” As of Saturday night at 7:40 p.m., the Facebook group, Justice for Jessica, had 151,167 likes.

The Last Refuge/Conservative Treehouse, run by “Sundance,” made a name for itself during the Trayvon Martin and Mike Brown scandals.

Sundance and his collaborators believe that Panola County was in the grip of black organized crime. More importantly, they came up with a post on Facebook from about 24 hours before Chambers’ murder, by a “Teapooh Itiswatitis,” via a "Derrick Jaxn" (December 5, 2014 8:50 P.M.).

The comment was sparked by Rudd reading a satire of white racism wherein a police officer shot a one year-old black baby. Apparently taking it literally,

"Teapooh" typed the comment, "Somebody need to rape all his kids in front of him then sit(sic) the house on fire an watch them burn....i bet he was a white man SAD".

Sandy Rudd is the aunt of Bryan Rudd, Jessica's abusive, criminal ex-boyfriend and local gang member. Sandy … is herself alleged to be a member of at least one notorious criminal gang…

Sandy Rudd acknowledges that she is the one at the gas station who asked Jessica Chambers for a cigarette [shortly before Chambers’ murder], when Jessica is seen on the store surveillance video….

"Teapooh" is, according to the "hacktivists" who have accessed various social media accounts of the people involved, actually Teanna Rudd, the wife or live-in girlfriend of a man named Brejuan Buyers.

Brejuan Buyers is the man seen on the gas station's surveillance video with the gas can in the hours just prior to Jessica being burned over 98% of her body. He rode with Sandy Rudd in her car to the gas station…

Thus, the threat came from a black woman who lived nearby, who knew Jessica Chambers, and whose boyfriend or husband crossed paths with Chambers at the gas station when she was last seen alive.

However, Bryan Rudd denies ever being a gang-banger, and says he moved to Iowa in May, 2013.

Jessica Chambers herself had a troubled home life. She was involved in drugs, and spent time in a drug rehab program, Leah’s House, sometime not long before her murder. [Was Jessica Chambers on the Way To Women’s Shelter On Night of Murder? Leah’s House Possible Destination, Inquisitr, December 23, 2014]

As mentioned before, the theory among many blacks on social media is that Ben Chambers had murdered his own daughter. GotNews, the site run by Johnson and Cardillo seems to support this claim, suggesting that Jessica Chambers died because of her father’s involvement meth dealing white gangs.

GotNews also tracked down Bryan Rudd, Jessica’s black ex-boyfriend, in Idaho, and conducted a 28-minute interview with him.

However, Rudd refused to point to Ben Chambers Sr. as the killer, saying, “I wouldn’t begin to tell you who did it.” [BREAKING AUDIO: Ex-Boyfriend Says #JessicaChambers Had Abusive, Criminal, Racist Home Life by Charles C. Johnson, Got News, January 3, 2015. Note: the audio now seems to have been taken down].

The Last Refuge has pushed back against this reporting, charging that Johnson and Cardillo are extrapolating from a 2012 case they found of a white couple attacking a woman two hours away, in Lee County, MS. [Catching Up…, January 4, 2015].

In my own investigations, I found nothing about white supremacist crime gangs in Mississippi.

As far as the Chambers case specifically, Sheriff Dennis Darby’s staff told me that DA John Champion is dealing with the media, but the latter did not return the message I left on his answering machine.

ATF Public Information Officer Kevin Moran assured me he’d get back to me when and if he had anything, but there was no news on his end. He noted that social media can sometimes be helpful, but creates a great deal of extra work for law enforcement as they must sift through fantastic claims. He assured me that the case was very much alive.

At The Panolian newspaper, where headlines about the case refer simply to “Jessica,” Publisher John H. Howell Sr., said in an interview of the case, “Cold is the word.”

Howell dismissed the notion that white supremacists burned Jessica Chambers alive for interracial dating. Howell opined that such tactics are a “kind of general skinhead thing. But not locally.”

“There’s been a lot of people pointing fingers at the dad, but there’s been nothing credible enough to publish.”

We both agreed that Jessica Chambers had an awful, short life.

Jessica Chambers would have turned 20 on February 2. The national MSM will continue to ignore the case. And by all accounts, the killers may have already gotten away with it.