The FBI has just classified “white nationalists and Neo-Nazis” (n.b., no distinction) as the same as ISIS (!), and America’s JournoFa are congratulating themselves [The FBI Just Put White Nationalists and Neo-Nazis on the Same Threat Level as ISIS, by Tess Owen, Vice, February 6, 2020]. Meanwhile, back in the real world, an Antifa group attacked people in Portland OR, a GOP voter registration booth was attacked in Florida, Antifa harassed police who were keeping them from attacking a rally by the Patriot Front, and two  police officers were shot in “assassination attempts” New York City—all within a few hours. Will President Donald J. Trump do anything about this? Or just tweet?

We know that at least the Florida car attack is on Trump’s radar. Gregory William Loel Timm is accused of driving through a GOP voter registration tent, stopping, taking a video, and then flipping off the people he almost killed [Man accused of driving through Republican voter registration tent arrested, by Nick Jones and Allyson Henning, February 9, 2020].

Timm’s actions demonstrate far more premeditation, motive, and malice than the case of Charlottesville Unite The Right car driver James Fields, who was caught in a dangerous, chaotic environment unleashed (according to an independent report) by local and state authorities and whose state-appointed lawyers simply failed to defend him. Incredibly, the Trump Department of Justice has not investigated the independent analyst’s damning report, although doing so could have turned around the Ruling Class’s anti-Trump Charlottesville Narrative.

Trump has taunted Timm on Twitter, warning him to be “careful who he plays with” [Pictured: Man, 27, who’d deliberately drove his SUV into a tent full of Trump volunteers registering new Republican voters, by Andrew Court, Daily Mail, February 9, 2020]. 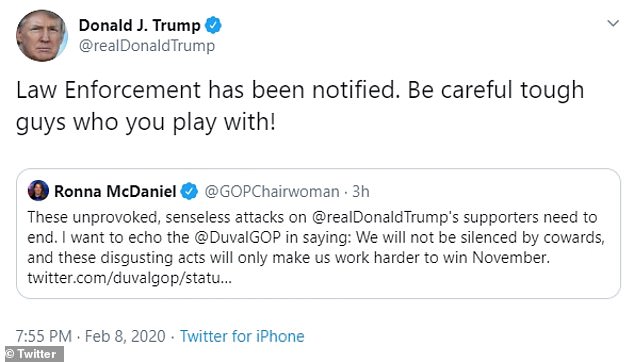 But, absent real action from Trump, this tough talk just makes things worse. It encourages patriots to confront Antifa when local law enforcement, frequently Democrat-controlled, may be on Antifa’s side.

Remember, it’s actually easy to keep two opposing political camps separate for the protection of both. The Patriot Front rally went off fairly peacefully in Washington D.C., because law enforcement did their job.

Of course, the MSM reported this as the group having a “police escort,” as if the police were guarding the protesters [Masked white nationalists march in Washington with police escort, Reuters, February 8, 2020]. Reporters are frustrated that the DC Metropolitan Police said “the First Amendment demonstration was peaceful with no arrests.” Yet what did the MSM want? No police separating the two sides? That’s what happened in Charlottesville.

On a smaller scale, that’s what just happened in Portland. Another one of these mysterious “KKK rallies” that pop up only to get canceled (as if the KKK is active in Portland!) gave Antifa an excuse to come out.

There were no Klansmen marching in Portland, but that didn’t stop Antifa from throwing flares, chasing random people down the street, and throwing objects at police. In one case, a masked gang pursued a videographer—and the Portland police contemptuously told him they would not help.

“We're not going to come out and save you,” Portland police tell a videographer who ran to them for help after being pursued by an aggressive mob of masked antifa militants. Police tell him to go elsewhere because they won't be helping. https://t.co/xnalYtzWM5 pic.twitter.com/R19YuSzgzo

Antifa spray-painted memorials with slogans like “Kill Cops,” “All cops are bastards,” and “Punch cops” [KKK cancels Portland rally; 3 protesters arrested, by Jennifer Dowling, KOIN 6 News, February 8, 2020]. Does this count as what the MSM calls “radicalizing” speech and incitement to violence?

In contrast, around the same time, Robert Williams, who appears to be a black man, was captured after walking into a New York City police station and opening fire [Gunman ambushes NYC police twice in 12 hours, spawns outrage, by Sophia Rosenbaum and Deepti Hajela, Associated Press, February 10, 2020]. He surrendered only after he ran out of bullets [Bronx precinct shooting suspect Robert Williams surrendered after running out of bullets, by Anabel Sosa and Aaron Feis, New York Post, February 9, 2020].

Are Antifa responsible for this man’s actions? When the MSM is promoting cop killers, journalists are telling people that cops are murdering people in the street, and Antifa are explicitly promoting killing cops, what does anyone expect?

This was also just a few days after a mass anarchist protest designed to shut down public transport because it’s “racist” that blacks get arrested for not paying the fare [Anarchists spark riots, vandalism at Grand Central – shutting down trains and causing mayhem, by Pat Droney, Law Enforcement Today, January 31, 2020]. “F**k the police,” was among the slogans.

Yet there has been no reaction from the White House—any more than when House Republicans were almost massacred at a baseball game by a Sanders supporter in 2017.

There’s no sweeping crackdown, no investigations, no solemn declarations about domestic terrorism from the Department of Justice. Above all, there’s no massive wave of private and public sector repression as after the Democrat riot at the 2017 Unite The Right rally.

Instead, the FBI boasted about breaking up “The Base,” which allegedly planned a mass shooting in Virginia [“Racially-motivated violent extremists elevated to national threat priority,” by Erin Donaghue, KUTV, February 6, 2020]. Nobody I know has ever heard of these people. It has been suggested they’re actually not political but a Satanic cult.

All of which raises an obvious question: What does “white nationalism” even mean? If we take the most radical definition, working for an explicitly white homeland within the territory of the United States, that’s simply what Keith Ellison and other members of the Black Congressional Caucus have explicitly advocated, only for blacks [Racial nationalism – real and imagined, by Gregory Hood, American Renaissance, November 20, 2017]. It’s what Hispanic separatists have openly promoted for years.

If we take “white nationalism’s” milder definition—of working for white interests—that’s simply the same rationale behind organizations like the Anti-Defamation League, the NAACP, UnidosUS (formerly the National Council of La Raza), and countless other ethnic activist groups.

Given that Democrats like Elizabeth Warren are advocating “race-conscious” policies, how can whites not organize on ethnic lines? What is illegitimate about that?

It certainly seems more honest and honorable than pulling a Warren or Rachel Dolezal and pretending to be a non-white  for career advantage—cases in which by themselves blow apart the doctrine of “white privilege.”

To repeat (again): VDARE.com is ultimately not a white nationalist site. We want America to work.

Yet that would involve making English the official language, abolishing affirmative action, imposing an Immigration Moratorium, and removing official multiculturalism. And these things are unlikely to happen without whites pushing for them.

If these policies are not implemented, it’s absurd that whites, and only whites, are forbidden from advocating their own interests within the American caste system that our Ruling Class has created.

President Donald J. Trump, a “fascist” according to the Main Stream Media, runs the Executive Branch of government. Thus, we would expect a sweeping crackdown on Leftist/ MSM radicalism. But instead, the state is gunning for patriots.

While the FBI is snooping around and trying to trap people into saying stupid things so they can arrest them, Leftists are running wild, radicalized by the MSM and academia.

Tough-guy posturing is not what we need from the Commander-in-Chief. We just need common sense law enforcement.

Local authorities in Charlottesville, Portland, and New York City have simply given up control of the streets. If the federal government is not willing to stop in, what it is even for?

If VDARE.com really is as influential in the White House as journalists seem to believe, perhaps someone can get Donald Trump this message: Gangs who hate patriots, police and the president are openly committing violence and getting away with it.

We need Donald Trump to do something more than Tweet.