See, earlier,  The Amount Of Immigration Patriotism In Donald Trump’s Speech Is Amazing! 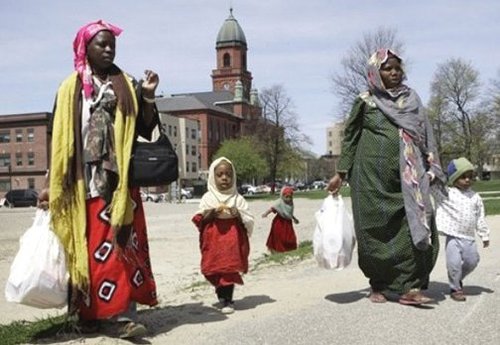 James Fulford writes: The Lying Press went crazy over the Donald J. Trump’s very significant August 4 speech in Portland, Maine, typified by the Washington Post’s SHOCK! HORROR!! headline Donald Trump now says even legal immigrants are a security threat [by Jenna Johnson, August 5 2016]), although in fact Trump has been explicitly criticizing legal immigration since at least last summer. Much of the outrage focused on the fact that he’d dared to raise the topic of Somali refugees in Maine (pictured right) who have enriched the place with welfare dependency, Female Genital Mutilation, muggings and rapes. See Donald Trump targets Somali refugees during Portland speech, AP, August 4, 2016. The Cultural Marxist/ Main Stream Media Complex knows it is vulnerable, even in blue-state New England, if the Refugee Racket is exposed.

As far as we can see, neither the Main Stream Media, nor the Trump campaign with its well-known dedication to the New Media, has actually bothered to post the speech. So VDARE.com has transcribed and annotated the immigration portion.

Note that, unlike his more recent speeches, scripted and read from a teleprompter, this is classic Trump extempore—a technique which, while famously effective on the stump, sometimes reads oddly in cold pixel. Normally we edit transcripts, but we’ve not done so here because we don’t want to be accused of putting words into the candidate’s mouth.

Watching the video makes clear, however, that Trump is didn’t need a speech writer to construct this long list of immigrant atrocities, he just needed the facts. This, like the whole speech, is a very good sign.

So, we’ve just seen many, many crimes getting worse all the time and as Maine knows, a major destination for Somali refugees, right? Am I right?

[Cheers from the crowd]

Well, they’re all talking about it: Maine Somali refugees. We admit hundreds of thousands into Maine and into other places into the United States. Hundreds of thousands of refugees, and they are coming from among the most dangerous territories and countries in the world. A practice, which has to stop.

So the Washington Times reported of a Somali refugee program in Minnesota that, “the effort to resettle large groups of Somali refugees is having the unintended consequence of creating an enclave of immigrants with high unemployment that is both stressing the states,”...I mean, the state is having tremendous problems, it’s a safety net…”and creating a rich pool of potential recruiting targets for Islamic terror groups.”

[JF:: See 26 terror plots in US tied to immigrants, Sen. Jeff Sessions says: 'Screening is very poor', By Leada Gore, AL.com, November 16, 2015 and Feds’ relocation of Somali refugees stresses Minn. welfare, raises terror fears, By Kelly Riddell, The Washington Times, February 24, 2015. I think the AL.com story—and Jeff Sessions, who released this list of immigration-related terror plots the MSM doesn’t want to cover—is the source for many of these stories.]

Take a look at what is happening in France. Two weeks ago in Nice. You remember what happened in Paris? In Paris we had the disaster where 130 people were viciously and violently killed. And, by the way, if you had some guns on the other side of that equation, it wouldn’t have happened, believe me. You wouldn’t have had the tragedy that you had.

[JF: Trump is speaking up for the right and necessity of ordinary Americans to have the means to defend themselves against Immigrant Mass Murder. That’s something no Republican candidate has been willing to do, while Democrats actually speak against it.]

Remember this, Hillary Clinton essentially wants to take away your rights under the Second Amendment.

Now, the National Rifle Association not only endorsed me, I think they endorsed me earlier that anybody they’ve ever endorsed. We need to protect our Second Amendment; we have to do it. Believe me, if she gets in, remember, justices of the Supreme Court will be ruling very negatively if you put her there. Very important.

I said to a friend of mine, “Well you have to vote for me.” He’s a Democrat.

“Number one, I’m your friend.” [Laughter]

He said, “You’ll be the first Republican I ever voted for, and that’s ok.”

But, I said, “Justices of the Supreme Court, she will put (because she was forced so far left), she will put super, super Liberal judges in, what could be, four or five slots. I mean, you have one before you even start, Judge Scalia, who was terrific. But, you have a situation where she could have or the next president could have as most as five, most likely it will be three or four, but perhaps a record number, of justices of the Supreme Court. And, if for no other reason, you have to go out and you have to vote for Trump.”

[JF: John Derbyshire discussed this threat in the latest Radio Derb–he calls it the Clintocalypse. The NeverTrumpers apparently don’t care.]

So, just a few other instances.

Oh, that’s wonderful. We take them, right? We take them. And you see what happened? How violent and how vicious and how horrible was that? And if they’re not here, we don’t have that incident, which killed and badly wounded so many.

And what I said is so true. If you look at San Bernardino, what I said is so true, Second Amendment. If guns, a couple, one, were on one, two, or three of the people in San Bernardino so the bullets are flying in the opposite direction. Number one, they probably would not have made the attack. Number two, the carnage (and it was carnage, 14 people killed, many in the hospital), it wouldn’t have happened or it certainly would have been a lot less.

[JF: The US has an official list of “State Sponsors Of Terrorism” which changes based on international politics. Currently there are three: Iran, Syria, and Sudan. The US gets refugees from all of them.]

There is no way of vetting them. You have no idea who they are. This could be the great Trojan Horse of our time.

Oh, wonderful. I don’t want them in this country.

And by the way, you have to turn these people in. You know, when you go to San Bernardino they had bombs all over the floor of the apartment. People saw those bombs and they didn’t turn them in.

Those people are guilty of a crime. Believe me.

[JF: A “fact-checker” claims this isn’t true—but the truth is actually worse. Suspicions about Tashfeen Malik and Syed Farook remained unreported because they were Muslims and their neighbors didn’t want to “profile” them. Neighbors of husband and wife San Bernardino shooters 'noticed them acting suspiciously but did NOT report them for fear of racial profiling', By Mia De Graaf and Snejana Farberov, Dailymail.Com, December 4,2015 ]

We’re dealing with animals. Preferably execution style. Hillary Clinton wants to have them come in by the hundreds of thousands. Just remember that. [Hillary’s target for refugees is 500 percent increase. More than 3 million refugees in total have arrived in the U.S. since 1975.]

This has nothing to do with politics, folks. This is a whole different level. This has to deal with pure, raw stupidity. Ok?

[JF: And after he was arrested, he was charged with assaulting the deputies holding him.]

These are the people we have coming into our country. And they’re the ones we know about. There are so many that we don’t know about.

[JF: I interrupt this message to explain one reason voters don’t know about it—the MSM and its peculiar culture of suppressing race and immigration status. The immigrant from Yemen mentioned above is Mufid Elfgeeh, a pizzeria owner in New York, arrested for plotting with overseas terrorists. Here’s how he shows up in the press:

“More than three months [after we sent our letter] the Administration has not provided immigration details on a single one of the 72 [terrorists identified in our letter]...In just the last year, refugees and other migrants admitted to the U.S. from Bosnia, Somalia, Sudan, Saudi Arabia, Uzbekistan, Kazakhstan, Ghana, Kuwait and Bangladesh have been implicated in terrorist activity.”

And you have many more like that, thousands and thousands. We have more people right now being looked at by the FBI and others than we’ve ever had in the history of our country. And it’s impossible to do this. Thousands of people are being looked at and studied, thousands.

This is what we’re living with, and she wants to allow 550% more than Obama is allowed to come into the country.

So if you want to let her do it, folks, then it is going to be your choice, but I think you are making a very big mistake.