Earlier: Biden’s Immigration Disaster: None Dare Call It Treason. But What If THEY Call It War?

As this is written, another migrant caravan marches on our southern border, a column of invaders moving towards a country whose rulers apparently have no will to defend its frontiers. The Biden Administration is creating a permanent immigration crisis by making border protection ideologically indefensible. Republicans could take advantage of this, but they are strangely quiet, except for Donald Trump. The battle for common-sense immigration control has always been a race against time, and we are about to find out if time has run out—if changing demographics have led to a voting base that will permanently support mass immigration because it will lead to the replacement of the Historic American Nation.

The “massive” migrant caravan is heading north, already scuffling with Mexican police and overrunning a blockade [Massive migrant caravan begins journey to U.S. from Mexico, by Caroline Downey, Yahoo News, October 23, 2021]. And why wouldn’t they come? The last “caravan,” composed mostly of Haitians, was essentially turned loose into the country and the number of illegals is only increasing [Illegal immigration soars under Biden to third-highest in 97 years, by Anna Giaritelli, Yahoo News, October 22, 2021].

The Regime Media narrative on immigration has transformed from denying that there is a crisis into saying that the collapse of immigration law enforcement is actually a good thing. Congresswoman Maxine Waters’s declaration that Border Patrol agents trying to corral invaders was “worse than what we witnessed in slavery” is crystalizing into a doctrine that border enforcement itself is rooted in slavery [Advocates say US immigration is rooted in anti-Blackness. Here’s how policies puts Black migrants at risk, by DeArbea Walker, Insider, October 22, 2021].

Don’t laugh. The narrative that policing itself derives from slavery was a justification that was used for the “defund the police” demand during BLM protests [The Invention of the Police: Why did American policing get so big, so fast? The answer, mainly, is slavery, by Jill Lepore, New Yorker, July 13, 2020]. The result, of course, has been a crime wave that is still plaguing American cities. The ideological supports that justify the basic responsibilities of the state—law enforcement domestically and border protection internationally—have been kicked out from underneath. It’s like a man standing on a footstool with a rope around his neck who knocks it over so he can hang himself.

Actually, the better metaphor would be to say that America is like a man who has the footstool kicked out from underneath so he can be lynched. 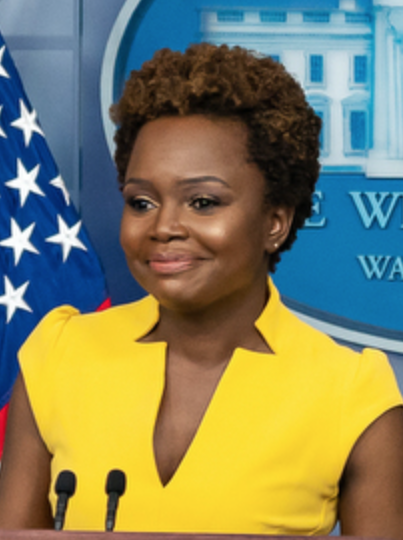 Thus Biden’s  current Deputy Press Secretary, Karine Jean-Pierre, right, an immigrant from Martinique born of Haitian parents, is already lecturing Americans on who “we” are and throwing the Border Patrol under the bus:

I think we all felt such pain when we saw what happened at the border with, sadly, some of the officers (who were filmed using force to push back migrants) – those officers do not represent all of them. It was just a few officers and it was heartbreaking. The president spoke about it, the vice president spoke about it, they denounced it and said this is, basically, not who we are. And I think for many people in this country—especially African-Americans, Black people—it reminded them of a time that was incredibly painful, that is part of our history, that is part of this country’s history and I think that’s why it hits so hard when you think about slavery days and enslaved Black folks, when you think about the Jim Crow years. It was very hard to see, and the president spoke out about it, he was very clear that it was not acceptable and so to me that’s what matters: The fact that the two people that I work for, essentially the president of the United States and the vice president, stood up and were very strong about it and said this is not how we should be represented and that this is not how we should be treating migrants.

[Deputy White House press secretary: ‘We want to make sure immigration policy represents who we are,’ France 24, October 24, 2021]

(“Migrants” is Regime-speak for “illegal aliens.”)

The White House isn’t just implying that it’s bad to enforce the law because of racism. It’s also making sure that practically anyone in the world (presumably, except white South Africans) can qualify to be a “refugee.”

One wonders if the collapse in Afghanistan was so chaotic because the Biden Administration wanted to make sure as many people as possible would be shipped into the country.

In a reversal of the “War on Terrorism” propaganda, “we” won’t fight them there so “we” can bring them in here.

Even Regime Media is reporting that the system is broken and the military has been reduced to trying to control these random migrants [Afghan Evacuees at Fort McCoy Face Charges of Domestic Violence, Sex with Minors, by Konstantin Toropin, Military.com, September 23, 2021]. But these allegations are being met mostly with bored indifference [Lawmakers call for stronger vetting of Afghan migrants after alleged Montana sex crime, by Alec Schemmel and Julian Baron, NBC Montana, October 23, 2021]. Instead, the Washington Post is training its guns on Americans who have the temerity to wonder why they need to be replaced in their own community by Afghans [Afghans arrived near a small Virginia town, exposing two different versions of America, by Meagan Flynn, September 25, 2021].

White House Press Secretary Jen Psaki alluded vaguely to the federal government’s “legal responsibility” to care for underage illegals who arrive. I’ve been semi-critical of Mark Levin, who is not using his massive platform to tell the whole truth about what is being done to destroy this country via demographic replacement. But credit where credit is due—Levin clearly recognizes why these flights are taking place. “They’re clearly trying to affect the suburbs,” he said, charging that these flights are intended to change the domestic political environment [Levin: Migrant flights ‘all about politics,’ targeting suburbs: ‘They’re not going to Newark or Camden, by Charles Creitz, Fox News, October 21, 2021]. Levin has also joined Stephen Miller and Peter Brimelow in calling for impeachment.

Still, unless the GOP actually does something, these flights will continue. Why shouldn’t the Democrats keep doing this until they meet opposition?

The report blandly asserts that “tens of millions of people… are likely to be displaced over the next two to three decades due in large measure to climate change impacts” [Report on the Impact of Climate Change on Migration (October 2021), United States Government, October 21, 2021]. Besides making American taxpayers provide yet more foreign aid, the report asserts that wide-ranging changes to U.S. immigration law enforcement are necessary:

Existing legal instruments to protect displaced individuals are limited in scope and do not readily lend themselves to protect those individuals displaced by the impacts of climate change, especially those that address migration across borders. Given the growing trend in displacement related to climate change, expanding access to protection will be vital. The United States will need to strengthen the application of existing protection frameworks, adjust U.S. protection mechanisms to better accommodate people fleeing the impacts of climate change, and evaluate the need for additional legal protections for those who have no alternative but to migrate.

The potential ramifications of this are unlimited. It would impose new “legal responsibilities” on the government to simply accept whoever showed up at the border with an excuse about climate change. Such excuses would be unfalsifiable because you could claim anything is about climate change. The document is filled with the bureaucratic language about “stakeholders.” But the American people, who have the biggest stake of all, seem to be left out.

Perhaps that’s because our rulers have already written actual Americans off. The consequences of mass immigration are such that progressives can count on a “floor” of guaranteed support no matter how bad things get economically. Conservatives who are excited about a potential Republican victory in Virginia should instead be asking themselves how a once reliably red state became a progressive bastion due to demographic change [Virginia’s governor race in a dead heat, polls show, by Alex Seitz-Wald, NBC News, October 20, 2021].

Even if the GOP pulls off a close upset in the Old Dominion, it won’t undo the cultural and demographic changes that have perverted Virginia beyond recognition, essentially eradicating it as a meaningful identity.

Republicans who assume they will take back the House and Senate by doing nothing may face disappointment because there are vast swathes of the country that are essentially post-partisan. A statewide election in a place like California is as meaningless as one is in Venezuela or Zimbabwe. There is no point where things will get “so bad” that the people will spontaneously rise up and vote the bums out. That’s because there’s no longer a people, but squabbling tribes who vote based on race, not any shared community interest.

What’s the solution? If current trends continue, the American Right and the Historic American Nation simply cease to exist. Thus, conservatives need to stop conserving a hostile system and go on the attack, especially on immigration.

Unfortunately, President Donald Trump seems to be the only GOP leader speaking up about what’s happening to the country [Trump: US being ‘poisoned’ by illegal immigrants crossing the border, by Mark Moore, New York Post, October 24, 2021].

Time is running out to save the country. It may be out already, which is why we’re hearing more talk of “national divorce,” secession, and (my preferred solution) movements to redraw political boundaries within the Union [Three Maryland counties request to join West Virginia, by Joseph Payton, WSAZ 3, October 22, 2021].

However, none of these things will happen unless conservatives and nationalists are willing to do something besides complain.

Who, after all, is the nationalist champion? As it stands, it looks like it’s going to be Donald Trump again [Trump, your 2024 nominee,' by Mike Allen and Margaret Talev, Axios, October 22, 2021].

Given Trump’s quite modest immigration record in office, and his consistent failure to mention legal (as opposed to illegal) immigration since he left office, this doesn’t make me optimistic for the future of the Historic American Nation. It’s still looking for a tribune, someone who will have the will and competence to carry out the program that President Trump promised but failed to deliver.

But if a champion doesn’t emerge, many patriots will be forced into acting like the proverbially lunatic: doing the same thing repeatedly and expecting different results.

Of course, that’s still better than voting for a potential President Nikki Haley. Who knows? Perhaps Trump has learned from his mistakes.

Still, in a country so vast, I can’t help but think there’s someone out there with a platform and a voting base willing to protect the historic American nation. As someone said BT (before Trump), it would just take one speech.