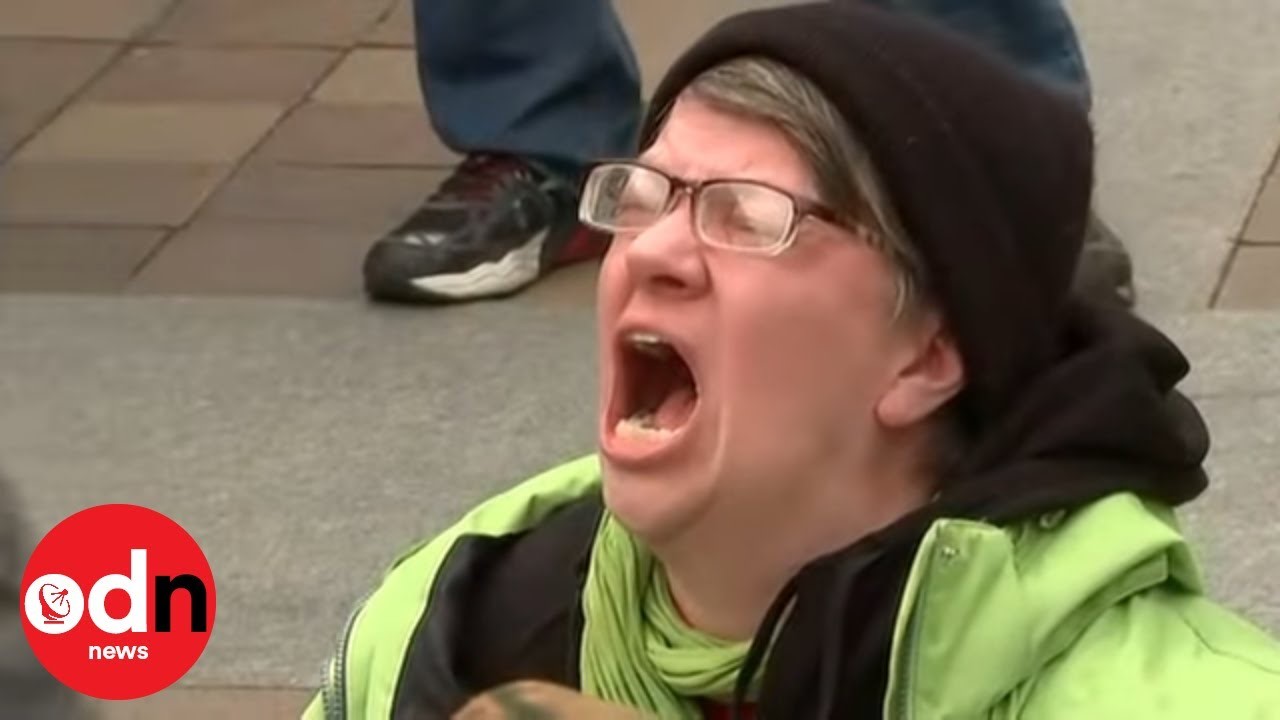 One of the most iconic images of the last decade is the youngish, female Social Justice Warrior collapsing to the ground and emitting what has been described as “a visceral, primal scream” [Protester who screamed at Trump’s inauguration: ‘This is not America,’ By Martin Geissler, ITV News, January 20. 2017] at the precise moment that Donald Trump was officially inaugurated as President of the United States. The protestor seemed to embody every stereotype about the young, liberal, Snowflake female: childish, attention-seeking, and, most obviously of all, mentally unstable; unable to cope with life’s disappointments and setbacks. A body of research of by psychologist Lee Jussim [Tweet him] has found most stereotypes are empirically accurate [Social Perception and Social Reality, by Lee Jussim, 2012]. And new research, so far only tweeted by the researcher in question, has shown that this stereotype to be more accurate than most. If you meet a liberal female under the age of 30, there is a more than 50% chance that she will have been diagnosed with a mental health disorder.

Zach Goldberg—whose Twitter profile explains that he is a “PhD student/Wokeness Studies scholar researching the ‘Great Awokening’”—has analysed the latest dataset released by the reputable Pew Research Center. This is the Pew Research Panel, Wave 64, which interviewed a representative sample of 11,537 American adults between March 19th and March 24th. In analysing the dataset, what really caught Goldberg’s attention was differences in whether interviewees had ever been diagnosed with a mental health condition among the white sample.

11/n Overall, and with one exception (white moderates), those in 18-29 age group are more likely to report being diagnosed with a mental health condition. The differences among white liberals, though, are striking: almost half of white liberals in this cohort report a diagnosis. pic.twitter.com/eKFG1GZF8t

Among those aged 18 to 29, some 20.9% of those who described themselves as “Conservative” answered “Yes” to the question “Has a doctor or healthcare provider ever told you that you have a mental health condition?” For those in this age group who were political “Moderates,” 26.3% answered “Yes.” But among those who self-classified as “Liberal” those answering “Yes” jumped up to an astonishing 45.9%.

So, to be clear, almost half of young white American Leftists have been diagnosed with a mental illness.

The same pattern was found among whites aged 30-49, 50-64, and 65 and older, except that the numbers with a diagnosis shrank with age. The only exception was among Moderates, where 26% of those in both of the two youngest age groups had been diagnosed with a mental illness.

In general, females are more likely to suffer from mental health conditions than males, because one of the most common of these conditions is depression. According to psychologist Daniel Nettle in his 2007 book Personality: What Makes You the Way You Are, females, being more prone to worry and anxiety, are more prone to depression than males. So Jonathan Haidt, known for his Moral Foundations Theory of political preferences whereby Liberals and Conservatives have a fundamentally different system of morality, asked Goldberg if he had broken down the data by sex.

This age analysis is super interesting. it fits with what else we know about Gen Z and the sharp rise in depression and anxiety that began around 2012. Have you broken this down by gender as well? The rise for gen Z is biggest for women.

And Goldberg—who is doing a PhD in Political Science at Georgia State University—analysed the data again, breaking it down by gender. The results were as predicted and were all the more striking for it. According to Pew Research Center data, 56% of Liberal females aged 18 to 29 have been diagnosed with a mental health condition, compared to 33.6% of Liberal males in this age band. Goldberg commented that this is the biggest sex gap by far in this particular dataset, meaning that young, Liberal females are, for some reason, particularly strongly prone to mental illness.

Even among Liberal females aged 30 to 49, over 39% have suffered from a mental illness. The most mentally stable of all are “Conservative” males over the age of 65, 4.5% of whom have ever been told by a doctor that they have a mental health condition.

Again, there are some interesting anomalies. Liberal females aged 65 and over are equally as mentally unhealthy as comparable Liberal males. Moderate women aged 30 to 49 have worse mental health than Moderate women aged 18 to 29. But the most striking result, according to Goldberg, is high levels of mental ill health among young, female, Liberal Whites.

Goldberg’s findings set off a refreshingly intelligent and reasoned Twitter debate with other researchers regarding the causes. Dr. Emily Ekins, right, of the Cato Institute, presented evidence that poor mental ill health is correlated with perceiving the world as beyond one’s control.

You should check out literature on locus of control, there is a correlation between mental health & belief that individuals have agency. Liberals emphasize whats beyond their control, conservatives emphasize whats within. I write about this here (scroll) https://t.co/kvvv57DdJy pic.twitter.com/Dsjw6rnQw2

She demonstrated that this is how American Liberals see the world—as controlled by Conservative forces—whereas Conservatives feel that they have agency, and can impact the world, and their place in it, if they work hard enough. In other words, Liberals are fatalistic and this makes them depressed. [What Americans Think Cause Wealth and Poverty, by Emily Ekins, September 27, 2019]

One possible excuse: Liberals tend to be wealthier and more educated and this may mean that they have better health insurance and are more likely to go to the doctor, thus getting themselves diagnosed. But this would be unlikely to explain such huge differences in mental ill health. Nor would it make sense of the enormous difference that Goldberg finds  between young Liberal females and young Liberal males.

Indeed, this would be in line with evidence that being left wing and atheistic is associated with mutant genes which would have been washed out under high levels of child mortality and in previous generations due to the strong relationship between mutations of the body (and thus a poor immune system) and mutations of the mind. With the collapse of child mortality, these mental mutations—whether depression or maladaptive ideas—have built up in the population [“The Mutant Says in His Heart, ‘There is No God,’” by Edward Dutton et al., Evolutionary Psychological Science, 2018].

The stereotype that young, Liberal females have mental health problems is clearly true. But we are left with difficult questions.

Why are these problems so much more elevated among young Liberal females than any other group in our country? Why are they so unhappy and unstable, even compared to the male fellow-travellers of the same age?

Could it be that they are, ultimately, happier in a society where female influence is a bit less?