Hollywood’s War Against Whites: Why BLACK PANTHER Is A Favorite At The Oscars 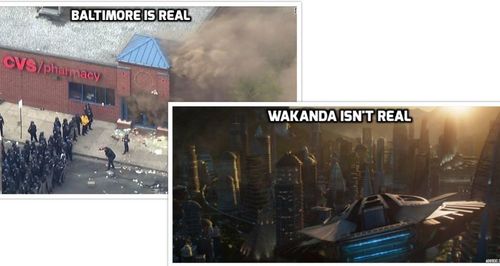 Roughly a year ago, VDARE.com was seemingly the only outlet pointing out the truth about the Black Nationalist fantasy pic Black Panther. I discussed in multiple pieces how this pop culture phenomenon offered an unsettling glimpse into not only how blacks viewed themselves, but how they viewed whites (“colonizers” is the derisive term for whites in Wakanda, the movie’s fictional technologically-advanced black utopia). Now Black Panther is widely expected to be named Best Picture at Sunday’s Academy Awards. It’s another stage in the destruction of a once-great American institution, and indeed America’s once-great white culture itself, by the rising tide of diversity and its corollary, Political Correctness.

Unlike most Marvel Cinematic Universe movies, Black Panther achieved the bulk of its box office take in the US—of a worldwide gross of $1.34 billion, 52 percent was domestic. In contrast, 2018’s Avengers: Infinity War had a worldwide gross of $2.04 billion, with just 33%  domestic versus 67% in foreign markets. Avengers: Age of Ultron, Captain America: Civil War, Thor: Ragnarok, Spider-Man: Homecoming and Iron Man 3 all made well north of 60 percent of their gross in foreign markets. Unmistakably, the almost all-black film wasn’t as warmly received internationally as Marvel’s films with predominately white casts.

“Maybe the Chinese are still not used to a film full of black people,” wrote one reviewer on Douban [link in Chinese]. The commenter said he had to pinch himself more than 10 times to stay awake during the movie because “Black Panther is black, all the major characters are black, a lot of scenes are black, the car-chasing scene is black—the blackness has really made me drowsy.”

[“A torture for the eyes”: Chinese moviegoers think Black Panther is just too black, by Echo Huang, QZ.com, March 12, 2018]

How did professional movie reviewers in America rate Black Panther? It has a 97 rating with professional movie reviewers at RottenTomatoes.com but, significantly, only a 79% audience score at the same site. This is a reminder that at key moments our corporate journalists are as Politically Correct as their Soviet counterparts who wrote for Pravda.

Black Panther is also the highest rated movie in the history of cinema on RottenTomatoes, with 2019 BlacKkKlansman (directed by Spike Lee, who received an Oscar nomination for the movie) and 2017's anti-white horror film Get Out also rated in the top movies of all time. More illustrative of the insanity of the post-#OscarsSoWhite world.

Which brings us to Sunday’s ceremony.  Black Panther is the first comic book-themed movie nominated for Best Picture. Of course this is the wake of the #OscarsSoWhite protests, started in 2015 after a black woman used the rising tide of wokeness on Twitter to amplify her anti-white message of the Academy Awards being too white. ['OscarsSoWhite': Viewers threaten to boycott Oscars over lack of black and Asian nominations, by Daisy Wyatt, The Independent, February 23, 2015]  The powers that be in Hollywood came under attack from the online outrage mob with an insatiable thirst to turn all awards presentations into nothing more than resembling a BET Awards program:

The expansion of Academy membership to more than 9,200 stems from an ongoing effort to diversify its ranks following uproar over the lack of African-American nominees in 2015 and 2016, which culminated in 2016’s #OscarsSoWhite controversy. Two weeks after the widely criticized nominations were announced, AMPAS announced a goal to double the number of women and diverse members of the Academy by 2020.

Monday’s invitations, if accepted, will result in 38% of the Oscars’ governing body’s new class being comprised of people of color, increasing their representation from 13% in 2017 to 16%.

To help usher in Black Panther as the Best Picture of the 2019 Academy Awards, Georgia Congressman John (“Civil Rights Icon”) Lewis—fresh off of doing the coin toss at the Super Bowl in Atlanta as part of the NFL's Social Justice outreach [Bernice King’s Super Bowl Tweet Revealed Why The Coin Toss Was So Significant For Her, Bustle.com, February 3, 2019] —has been invited to present the award. This is an obvious hint as to which movie might be winning on this historic night, which is also conveniently scheduled at the end of Black History Month. [Georgia civil rights icon named as presenter for best picture Academy Award, WSBTV.com, February 20, 2019]

Oprah Winfrey, who holds an inordinate amount of sway in Hollywood (call it “black privilege”), was sought out by Disney executives to watch Black Panther and endorse it, bestowed upon the movie black nationalist praise.

"I just wanted to say that when I first saw Black Panther, I sent an email to my friend Bobby and said, 'Hi Bobby! Just saw it. It's worth everything I've heard and more. A phenomenon in every way, on every level. Makes me tear up to think that little black children will grow up with "Wakanda forever." It's game-changing, it's pride-making, it's dazzling, it's phenomenal.' That was my personal review."

"I also know that throngs and throngs and so many people came, and came with their families, and then they went back and they got more family members, and then they went back and told their co-workers and their friends, because everybody recognized that something bigger than a movie was happening up on that screen. We all knew — those of us who have come from the culture and the history — how lit it was. It just gave us life! It gave us life! But it was so affirming for everyone who saw it because you knew that it was bigger than this moment — it was a cultural happening — and just to be in the theater was to be a part of all of that."

One of the few white people who is part of the cultural elite who was brave enough to take a swipe at Black Panther was Bret Easton Ellis, the author of American Psycho. He noted frankly that the film was being praised and nominated primarily for diversity reasons:

No superhero movie has ever gotten a Best Picture nomination. But believe me, Disney is doing everything in its power to make sure this happens. Even though there is no one out here in La La Land I’ve met who thinks Black Panther is that good as a movie. Yet, as a piece of representation, they are supporting it.”

By an amazing coincidence, the Academy Awards in the post-#OscarsSoWhite period have seen ratings drop dramatically. [2019 Oscars Ratings: Will The Academy Awards Get A 'Black Panther' Bump? by Toni Fitzgerald, Forbes, February 22, 2019]

Black Panther winning the Best Picture at the 2019 Academy Awards will represent the greatest achievement yet in the Social Justice Warriors’ crusade against whiteness and for blackness, with the goal of seeing fewer and fewer white actors/actresses/directors promoted.

The whole premise of the Academy Awards has been bastardized in the pursuit of the anti-white agenda now spreading throughout all of American life.