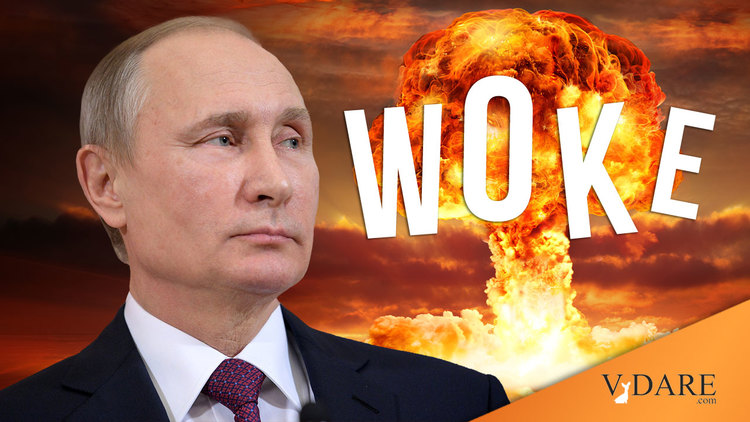 Every cloud has a silver lining. When, in response to the Russian invasion, the Ukrainian government announced that no male aged 18-60 would be permitted to leave the country because they were to be conscripted, nobody in the West, it seems, asked: “What do you mean ‘male’? How are you defining it? Does it include ‘transmen’?” Perhaps the usual Twitter alphabet mob did ask this, but it wasn’t amplified by being reported in the Anglosphere Main Stream Media—because, all of a sudden, there was a war. Life was serious and such self-indulgent, decadent concerns were no longer considered important. Is this a Trend?

Of course, a few virtue-signallers have complained about the “racial” aspect to some of the reporting. But, significantly, this seems to be limited to America. Thus the Washington Post noted the “racist” language, criticizing the way in which

…ITV News correspondent Lucy Watson reported from a train station in Kyiv that the “unthinkable” had happened to the people of Ukraine. “This is not a developing Third-World nation,’ she said. “This is Europe.”

[‘They seem so like us’: In depicting Ukraine’s plight, some in media use offensive comparisons, February 27, 2022]

But in Britain, where the war is far closer and more real, nobody cares anymore. WaPo was citing  the BBC allowing a Ukrainian deputy prosecutor to stress that what was happening in his country should be seen as crucial in the UK because there are: “European people with blue eyes and blond hair being killed, children being killed every day.”

Here you go. I honestly shouldn’t be shocked but how did the presenter not even challenge this? pic.twitter.com/8KqjLeM07F

There was no apology for his “racist language.” And if anyone did complain, the BBC didn’t highlight it.

People who once claimed that that the West was selfish and national borders and free speech should be abolished were now proclaiming the sacrosanct nature of national borders, that every “people” has a right to their own land, that the “democratic” West with its “free speech” needed to be preserved.

Part of this was simply Machiavellian opportunism. But for many people, I suspect, a deeper shift had occurred.

I have written before about how civilizations follow seasonal cycles and about how, based on numerous measures, we are in decline. But the invasion of Ukraine, while of course terrible for the Ukrainian people, could, counter-intuitively, be “good for the West.” It could potentially slow down Western decline via a kind of Silver Age.

How could this be? How could anything positive come of the suffering of the Ukrainians, in which innocent children have been killed by Russians bombs? [The faces of some of those killed in Ukraine as Russia's attack rages on, ITV, March 3, 2022]

Well, most obviously: Wokeness is an anti-rational, emotionally-driven force and this war has already begun to neuter it.

According to the “Hierarchy of Needs” concept developed by psychologist Abraham Maslow, humans, first and more foremost, require their physiological needs—food, water, shelter—to be met. Only once these are met are they able to start worrying about personal safety, employment and property. And only once these are met do they have the time left over to be concerned about even higher needs, such as status, respect and recognition.

Following this logic, the decadence of the late twentieth and especially the early twenty-first century can be partly explained in terms of almost everyone’s basic needs on the hierarchy being met, or having been met in their key developmental years, so that they are blithely unconcerned about them.

As a result, we have seen the rise of an increasingly self-indulgent society in which more and more people are ravenously concerned about status, power, and being respected. In its most extreme and Narcissistic form, this involves people being accepted as unique and able to define who they are, to the extent of telling you what pronoun they prefer.

When basics needs are met, these issues become important, contributing to a kind of runaway individualism where we are constantly concerned about offending against people’s—apparently sacrosanct—desires for absolute respect.

Plunge us into a situation of war, however, and these needs are suddenly unimportant. Worse than unimportant, they are divisive and selfish in a context in which we must surely pull together if we wish to survive.

Thus, in a context of war we would expect Woke concerns to be increasingly ignored and even for the people who voice them to be suppressed. Anxiety also elevates our most primal instincts, such as belief in God and ethnocentrism. as I discussed in my 2012 book Islam: An Evolutionary Perspective. So we would expect these to suddenly seem more “acceptable,” just as the ITV news reporter cited by WaPo found without even thinking about it.

In turn, the suppression of Wokeness—of extreme self-absorption, where feelings are put above truth—will make us more balanced in terms of what Moral Foundations Theory calls the Five Moral Foundations: in-group loyalty, sanctity, obedience to authority, equality and harm avoidance.

Humans are concerned with all of these Foundations because they are, from an evolutionary point of view, pack animals (hence the first three Foundations), but they also need to survive as individuals in an internally competitive pack (hence the latter two). Since the 1960s, we have become ever more concerned with individualizing values, these being the values of Leftists, according to psychologists. The specter of war will push us to the Right, meaning more of a balance and thus a greater concern with truth [Liberals and Conservatives Rely on Different Sets of Moral Foundations, by J. Graham et al., Personality Processes and Individual Differences, 2009].

Furthermore, the specter of war means that, by definition, we are competing with another group. This means that innovation starts to become far more important than “feelings.” This, in turn, means that we should start to become more tolerant of the genius-type. As I have explored in my recent book Sent Before Their Time: Genius, Charisma, and Being Born Prematurely, this is the highly creative thinker who tends to be high in autism traits and even psychopathology (poor rule following, no regard for the feelings of others). This contributes to him being both “offensive” and also highly creative, because he “thinks outside the box” and doesn’t care about offending against convention.

Consistent with this prediction, per capita major innovation—in other words, per capita genius—began to decline in around 1870, seemingly as average intelligence began to decline, and also as individualistic values gradually began to rise as the world became easier and easier.

However, there is some evidence that this decline went into reverse from about 1945. Per capita major innovation increased until the 1960s, before reverting to the previous decline [A possible declining trend for worldwide innovation, by J. Huebner, Technological Forecasting and Social Change, 2005].

The Cold War would be a reasonable explanation for this. It artificially recreated something of the conditions of “Group Selection” that prevailed before the Industrial Revolution, whereby groups competed with each other for limited resources and triumphed through a combination of optimum group-orientation and intelligence, including the optimum level geniuses, leading to selection across time for these traits, as I also explore in my book.

Two groups faced each other in a perilous war, so they suppressed individualism (more than they otherwise would have done), focused more on innovation (partly to defeat the enemy) and thus, briefly, reversed the process of civilizational decline.

Thus, in a very roundabout and indirect way, Putin’s war may save, or, rather, may slow down, the decline of, the West—just as the Cold War did.

Every cloud has a silver lining.

Or should that be “Every threatened mushroom cloud…”?