Can We Judge People By What They Look Like? In Fact, Yes

Unless it involves mocking President Trump’s supposedly "small hands," there is nothing that horrifies our multiculturalist masters more than judging by appearances. 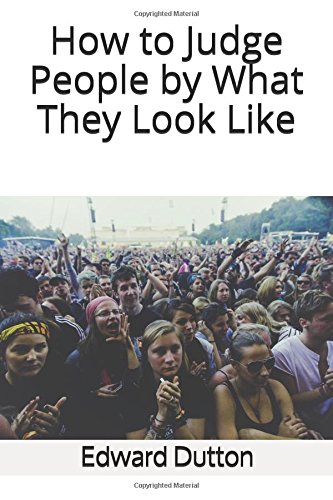 It is impossible, they claim, to infer anything about how someone is likely to behave by their gender or because they are from a particular ethnic group. Everyone is unique (but also, somehow, equal). Judging by appearances is not just superficial but plain evil.

It will be fascinating to see what they’ll make of the recently-published book by British academic Dr. Edward Dutton titled How To Judge People By What They Look Like, which argues that even within races and sexes you can, with a fair degree of accuracy, infer people’s personalities from appearances. You may even get an inside track on how smart they are by taking a good look at their physical characteristics, according to Dutton.

"You can’t judge people by what they look like! It’s drummed into us as children," writes Dutton, an adjunct professor of anthropology at Oulu University in northern Finland. "It is utterly false."

But Dutton makes a provocative case for resurrecting the ancient art of physiognomy—judging character from the face. He argues it should never have been dismissed as pseudo-science.

Indeed, his research goes way beyond making inferences from the face. He writes:

We are evolved to judge people’s psychology from what they look like; we can accurately work out people’s personality and intelligence from how they look, and (quite often) we have to if we want to survive. Body shape, hairiness, eye width, finger length, even how big a woman’s breasts are . . . these and much else are windows into personality, intelligence or both.

The Left would have you believe that this kind of research is on the extreme fringes of the academy; relegated to low-impact journals no serious scholar would read.

But, as Dutton says in his book, the relevant research has been published in top psychology journals, such as Intelligence, Personality and Individual Differences and Evolutionary Psychological Science, as has his own research. This includes a study asserting that atheists tend to be less physically attractive and more likely to be left-handed than religious people and that they have objectively worse skin.

Dutton, ever the evolutionist, opines that this is because we have been selected to be religious over thousands of years of evolution. Hence, those who are atheists reflect mutant genes in the brain and people with mental mutations are more likely to have physical ones. This explains their asymmetrical features and asymmetrical brains, leading to left-handedness.

Dutton’s book leaves no stone unturned and could potentially offend anyone except the archetypal Mr. Perfect. But science is not meant to care about offending people, and this is rather refreshing.

Presented in witty style, Dutton marshals evidence in support of his theory that different body types correlate with different personalities. People who are muscular, with long legs and arms, are prone to be aggressive and selfish. They reflect a "fast Life History Strategy" in adapting to an unstable environment in which you must live fast and die young. In such an environment, the personality of your partner isn’t important—you just want lots of healthy offspring. So, people invest energy in large secondary sexual characteristics—big muscles, large breasts—in order to advertise their genetic quality. This takes energy away from a more complex brain, so—in personality terms—they're more animal-like.

In fact, this short book (less than 100 pages) will allow you to quickly read people in social situations and be right far more often than not, as long as a number of physical markers all point in the same psychological direction.

For example: Large-breasted women, according to Dutton's theory, are more aggressive and selfish than their flat chested friends. One study of 144 women at University of Illinois found that large breast size was found to have a significant positive correlation with being "undersocialized," undependable, impulsive, "psychologically minded" (that is introspective), flexible and adventurous. Women with large buttocks were found to be introverted, self-abasing, and high in guilt. In other words, they were relatively low in extraversion and relatively high in aspects of neuroticism. [Attribution of choice, by I. Steiner, 1980. In Fishbein, M. (Ed). Progress in Social Psychology, Volume I. Psychology Press.]

Another study, involving 95 male subjects, found that men who like small breasts tend toward being religious and depressive, and men who like larger buttocks are ordered, dependent, and "self-blaming." [Correlates of heterosexual somatic preference, by J. Wiggins, N. Wiggins and J. Conger, 1968, Journal of Personality and Social Psychology, 10: 82-89.]

Among many other insights, Dutton notes that taller men are generally smarter than shorter men, because women have sexually selected both for intelligence and height. Intelligence gives men status and resources while height typically makes them better at winning fights and protecting the woman.

Intelligent people, he says, also have longer, less baby-like faces and longer noses. When developmental pathways in the brain are damaged, he explains, it is reflected in smaller noses, closer-together eyes, and short faces—as in Downs Syndrome and Fetal Alcohol Syndrome.

It follows, he asserts, that even minor problems in these pathways will be reflected in the face in the same kind of way, just more subtly.

There is so much in this little book to get your head around. Dutton even looks in detail into how hair color and skin complexion (controlling for race) can be successfully used to infer personality.

Dutton briefly explores race differences in evolved behavior, highlighting the evidence that blacks will tend to be the most aggressive, northeast Asians the opposite and whites intermediate.

However, he stresses that most of his findings only work within races. A broad face, for example, is associated with high testosterone and thus aggressiveness within a race. But this is not the case between races, because a broad face is also an adaptation to extreme cold. This means that it is found among the broad faced, but low testosterone, northeast Asians. However, among northeast Asians a broader face is a marker of higher testosterone.

This book makes a solid attempt to debunk the Leftist taboo on extending Darwinian theory to humans. Dark-mane lions are more aggressive, so are dark-haired and dark-skinned people, because dark coloring reflects testosterone, Dutton says.

It seems counter-intuitive that such a significant amount can be judged from appearances but there are clearly a growing group of academics who concur. Professor Bruce Charlton, Reader in Evolutionary Psychiatry at Newcastle University in England,  writes the forward that : "Dr. Dutton’s book is a necessary corrective to misleading modern myths and taboos about 'judgmentalism' and stereotyping. As he makes clear . . .  it is reasonable and sensible to take seriously our innate ability to sum-up a stranger with a glance.'"

Once you read this book, you’ll never look at people the same again. Though, if you know they’ve read it, you may feel paranoid about what they’re thinking about you.

Dutton doesn’t sugar-coat his findings, often presenting them in stark terms. Which brings up what we’re all waiting for, his assessment of the current occupant of the White House:

Lance Welton [Email him] is the pen name of a freelance science  journalist.