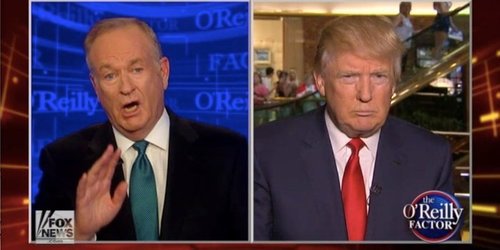 Based on the hysterical flailing at Donald Trump—He's a buffoon! He's a clown! He calls people names! He's too conservative! He's not conservative enough! He won't give details! His details won't work!—I gather certain Republicans are determined to drive him from the race.

These same Republicans never object to other candidates who lack traditional presidential resumes—Carly Fiorina, Ben Carson, Newt Gingrich and Herman Cain, to name a few. I'm beginning to suspect it's all about Trump's opposition to mass immigration from the Third World.

Amid the hysteria, Trump is the only one speaking clearly and logically, while his detractors keep making utter asses of themselves.

By my count—so far—Fiorina, Chris Christie, Rick Perry and the entire Fox News commentariat are unfamiliar with a period of the nation's history known as "the Civil War." They seem to believe that the post-Civil War amendments were designed to ensure that the children of illegal aliens would be citizens, "anchor babies," who can then bring in the whole family. (You wouldn't want to break up families, would you?)

As FNC's Bill O'Reilly authoritatively informed Donald Trump on Tuesday night: "The 14th Amendment says if you're born here, you're an American!"

I cover anchor babies in about five pages of my book, Adios, America, but apparently Bill O'Reilly and the rest of the scholars on Fox News aren't what we call "readers."

Still, how could anyone—even a not-very-bright person—imagine that granting citizenship to the children of illegal aliens is actually in our Constitution? I know the country was exuberant after the war, but I really don't think our plate was so clear that Americans were consumed with passing a constitutional amendment to make illegal aliens' kids citizens.

Put differently: Give me a scenario—just one scenario—where guaranteeing the citizenship of children born to illegals would be important to Americans in 1868. You can make it up. It doesn't have to be a true scenario. Any scenario!

You know what's really bothering me? If someone comes into the country illegally and has a kid, that kid should be an American citizen!

Damn straight they should! We've got to codify that.

YOU MEAN IT'S NOT ALREADY IN THE CONSTITUTION?

No, it isn't, but that amendment will pass like wildfire!

Napolitano at least got the century right. He mentioned the Civil War—and then went on to inform Bream that the purpose of the 14th Amendment was to—I quote—"make certain that the former slaves and the Native Americans would be recognized as American citizens no matter what kind of prejudice there might be against them."

Huh. In 1884, 16 years after the 14th Amendment was ratified, John Elk, who—as you may have surmised by his name—was an Indian, had to go to the Supreme Court to argue that he was an American citizen because he was born in the United States.

He lost. In Elk v. Wilkins, 112 U.S. 94, the Supreme Court ruled that the 14th Amendment did not grant Indians citizenship.

The "main object of the opening sentence of the Fourteenth Amendment," the court explained—and not for the first or last time—"was to settle the question, upon which there had been a difference of opinion throughout the country and in this court, as to the citizenship of free negroes and to put it beyond doubt that all persons, white or black ... should be citizens of the United States and of the state in which they reside."

American Indians were not made citizens until 1924. Lo those 56 years after the ratification of the 14th Amendment, Indians were not American citizens, despite the considered opinion of Judge Napolitano.

Of course it's easy for legal experts to miss the welter of rulings on Indian citizenship inasmuch as they obtained citizenship in a law perplexingly titled: "THE INDIAN CITIZENSHIP ACT OF 1924."

Yeah, Trump's the idiot. Or as Bream said to Napolitano after his completely insane analysis, "I feel smarter just having been in your presence."

The only reason the 14th Amendment doesn't just come out and say "black people" is that—despite our Constitution being the product of vicious racists, who were dedicated to promoting white privilege and keeping down the black man (Hat tip: Ta-Nehisi Coates)—the Constitution never, ever mentions race.

Nonetheless, until Fox News' scholars weighed in, there was little confusion about the purpose of the 14th Amendment. It was to "correct"—as Jack Nicholson said in "The Shining"—the Democrats, who refused to acknowledge that they lost the Civil War and had to start treating black people like citizens.

On one hand, we have noted legal expert Bill O'Reilly haranguing Donald Trump: "YOU WANT ME TO QUOTE YOU THE AMENDMENT??? IF YOU'RE BORN HERE YOU'RE AN AMERICAN. PERIOD! PERIOD!" (No, Bill—there's no period. More like: "comma," to parents born “subject to the jurisdiction” of the United States “and of the state wherein they reside.”)

But on the other hand, we have Justice John Marshall Harlan II, who despite not being a Fox News legal expert, was no slouch. He wrote in the 1967 case, Afroyim v. Rusk, that the sponsors of the 14th Amendment feared that:

"Unless citizenship were defined, freedmen might, under the reasoning of the Dred Scott decision, be excluded by the courts from the scope of the amendment. It was agreed that, since the 'courts have stumbled on the subject,' it would be prudent to remove the 'doubt thrown over' it. The clause would essentially overrule Dred Scott and place beyond question the freedmen's right of citizenship because of birth."

It is true that in a divided 1898 case, U.S. v. Wong Kim Ark, the Supreme Court granted citizenship to the children born to legal immigrants, with certain exceptions, such as for diplomats. But that decision was so obviously wrong, even the Yale Law Journal ridiculed it.

The majority opinion relied on feudal law regarding citizenship in a monarchy, rather than the Roman law pertaining to a republic—the illogic of which should be immediately apparent to American history buffs, who will recall an incident in our nation's history known as "the American Revolution."

Citizenship in a monarchy was all about geography—as it is in countries bristling with lords and vassals, which should not be confused with this country. Thus, under the majority's logic in Wong Kim Ark, children born to American parents traveling in England would not be American citizens, but British subjects.

As ridiculous as it was to grant citizenship to the children born to legal immigrants under the 14th Amendment (which was about what again? That's right: slaves freed by the Civil War), that's a whole order of business different from allowing illegal aliens to sneak across the border, drop a baby and say, Ha-ha! You didn't catch me! My kid's a citizen—while Americans curse impotently under their breath.

As the Supreme Court said in Elk: "[N]o one can become a citizen of a nation without its consent."

The anchor baby scam was invented 30 years ago by a liberal zealot, Justice William Brennan, who slipped a footnote into a 1982 Supreme Court opinion announcing that the kids born to illegals on U.S. soil are citizens. Fox News is treating Brennan's crayon scratchings on the Constitution as part of our precious national inheritance.

Judge Richard Posner of the 7th Circuit Court of Appeals is America's most-cited federal judge—and, by the way, no friend to conservatives. In 2003, he wrote a concurrence simply in order to demand that Congress pass a law to stop "awarding citizenship to everyone born in the United States."

The purpose of the 14th Amendment, he said, was "to grant citizenship to the recently freed slaves," adding that "Congress would not be flouting the Constitution" if it passed a law "to put an end to the nonsense."

In a statement so sane that Posner is NEVER going to be invited on Fox News, he wrote: "We should not be encouraging foreigners to come to the United States solely to enable them to confer U.S. citizenship on their future children. But the way to stop that abuse of hospitality is to remove the incentive by changing the rule on citizenship."

Forget the intricate jurisprudential dispute between Fox News blowhards and the most-cited federal judge. How about basic common sense? Citizenship in our nation is not a game of Red Rover with the Border Patrol! The Constitution does not say otherwise.

Our history and our Constitution are being perverted for the sole purpose of dumping immigrants on the country to take American jobs. So far, only Donald Trump is defending black history on the issue of the 14th Amendment. Fox News is using black people as a false flag to keep cheap Third World labor flowing.